In comparison to the popularity of game genres such as FPS, sports, and online multiplayer, JRPGs (Japanese Role Playing Games) are a niche interest – Trails in the Sky First Chapter is a hidden gem within this niche interest. Released in 2004 for the PC by Falcom, Trails in the Sky FC is a relaxing, well written, and deep JRPG that kicks off the Trails series with a bang. It tells the story of Estelle and Joshua Bright, two rookie members of the Bracer Guild (an organization that does odd jobs and quests) as they travel around the Liberl Kingdom to find their missing father. However, the two find themselves wrapped up in a military coup d’etat where they must fight to protect the kingdom. 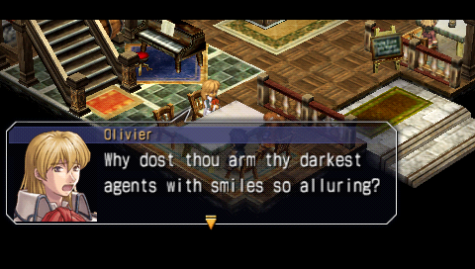 Trails in the Sky FC’s biggest strength is its setting – the Liberl kingdom and the rest of the Trails world are insanely interesting. Each city and nation have their own unique cultures, economies, and politics – leading to interesting interactions and conflicts between them. The concept of the Trails setting is one that industrialized heavily in a short span of time, going from late eighteenth century technology to early forms of computers in about 50 years. The rapid industrialization allows for a world that has advanced technology but does not understand the repercussions of it, which is a theme explored throughout the series. The nations and political philosophies draw parallels with european history, making them feel realistic and grounded while playing key roles in the story. The setting is also absurdly detailed, with most NPC’s having their own storylines, backgrounds, and relationships that progress along with the main story. One of the most interesting parts of the Trail’s world is that each of the subseries (Trails in the Sky, Trails from Zero, and Trails of Cold Steel) take place within the same world and timeframe, meaning that the events of each game affect each other and are shown from different cultural/national perspectives. In a sense it works like the Marvel Cinematic Universe but without the bad filler installments and predictable plotlines.

The setting isn’t the only element that makes Trails in the Sky great; the characters and writing are excellent. Each of the main characters are well written, interesting, and have great chemistry with the rest of the cast. Unlike most JRPGs the antagonist is not some evil god or king, but a man with good intentions who could be considered more righteous than the protagonists (depending on your perspective). The writing is consistently good, delivering on both extremely emotional and humorous moments. The plot really plays to the game’s strengths by having Estelle and Joshua travel throughout the kingdom, experiencing what makes each location in Liberl unique. The gameplay is a mix strategy and turn based combat with an excellent battle theme that plays in the background. The magic system, called Arts, allows for much experimentation and is quite rewarding. The difficulty is challenging but not too hard for newcomers to the genre. The amazing soundtrack compliments the setting and battles greatly – especially Silver Will, a track that plays during important story battles, which never failed to hype me up.

Personally I found Trails in the Sky FC’s slow pace to be relaxing but it could possible turn new players off. The main plot doesn’t really kick off till the second half of the game. However, the slow pace is used to flesh out the characters and setting, getting the player invested in Estelle and Joshua’s story – making it all the more devastating when tragedy strikes. The combat is not bad, just slow and nothing special. Dungeon crawling can feel like a slog but luckily you have the ability to greatly speed up the combat and exploration. The other thing that new players should be aware of are the graphics, which have not aged that well. Despite the graphics, the character designs are nice and their portraits are quite expressive. The only criticism that I have with the writing is that a few characters are tropey but I can easily forgive this due to how well written they are. Another criticism of the game is that the camera angles during gameplay, which are controlled by the player, can be unwieldy and annoying at times. The positives definitely outweigh the negatives, but new players should be aware of the slow pace and age.

At its heart Trails in the Sky is a cozy game that tells the story of growing up and experiencing new things in a chaotic time with an uncertain future. The slow pace, great soundtrack, and interesting setting make the game feel very soothing – giving me the feeling that I had playing the JRPGS that got me so invested in the genre, such as Pokemon and Persona 3. If you are at all interested in RPGs or story/character heavy games I must recommend that you check out Trails in the Sky. All three games in the Trails in the Sky trilogy can be found on Steam, along with the first Trails of Cold Steel (which is also an excellent game). Trails in the Sky FC is only the first chapter in the Sky trilogy and has quickly become one of my favorite games. Unfortunately, the series is criminally underrated in the west – kept alive by a small yet passionate fan base. Trails is a completely unique experience that does not conform to genre tropes and excels in setting and writing. The painstakingly detailed setting has become one of my favorite fictional worlds due to its complex politics, clashing philosophies, and realism. Trails in the Sky is one of my favorite games and one I believe to be among the best of the best.