MOVIE REVIEW: Geostorm less of a storm, more of a bore 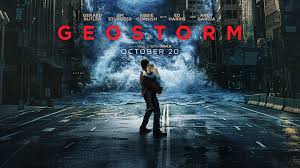 Are you ready for an amazing natural disaster movie that will leave you on the edge of your seat? Have you been waiting to see special effects that will blow your mind? If your answer to these questions is yes, do NOT go see Geostorm. Though the trailer will most likely capture your attention, it is much more interesting than the movie itself.  The trailer displays the few interesting parts of the movie, not including the boring plot the watcher gets to view.

When going into the theater, you may have high expectations to be frightened or on the edge of your seat.  Do not get too excited because your expectations will surely not be met.  The movie was not terrible; however, it involved family matters not relevant to the plot more than the natural disasters we all hoped to see more of.

The main plot of the movie involves a malfunctioning machine in outer space, called the “Dutch Boy,” which was created to control the weather and prevent global warming, which creates major natural disasters.  Different settings are shown all over the world where these natural disasters such as freezing weather, alarmingly hot weather, hailstorms, tornadoes, etc. occur. However, we rarely get to see these natural disasters. Rather, we mainly get to see brotherly conflict between main characters Jake Lawson, architect of the “Dutch Boy,” and his brother, Max Lawson.

A large portion of the plot revolves around the relationship between the two brothers and Max’s relationship with his Secret Service agent girlfriend, Sarah Wilson.  Jake was rehired by Max, who had fired him 3 years before, and sent up to space to fix the “Dutch Boy” he created, leaving his daughter behind on earth.  Throughout the movie, the characters realize that someone working on the “Dutch Boy” is hijacking it and that the Secretary of State, Leonard Dekkom, is in on the plan.

After these scenes take place, we finally are brought back for a few seconds to what the movie is supposed to be about: the geostorm.  We learn that the only way to stop the geostorm is to destroy the “Dutch Boy”.  Max and Jake have a heartfelt chat over Face Time that they think will be their last because Jake has to stay onboard while the “Dutch Boy” self destructs.  However, no matter how much more interesting the plot would be if this were to happen, there is no geostorm, and, predictably, Jake makes it back to his daughter alive.

Geostorm lives up to the low expectations of movie fails in this genre such as “The Day After Tomorrow” and “2012.”  Do not waste your money on this film unless you are really into a boring plot with no action and suspense that leads you nowhere.