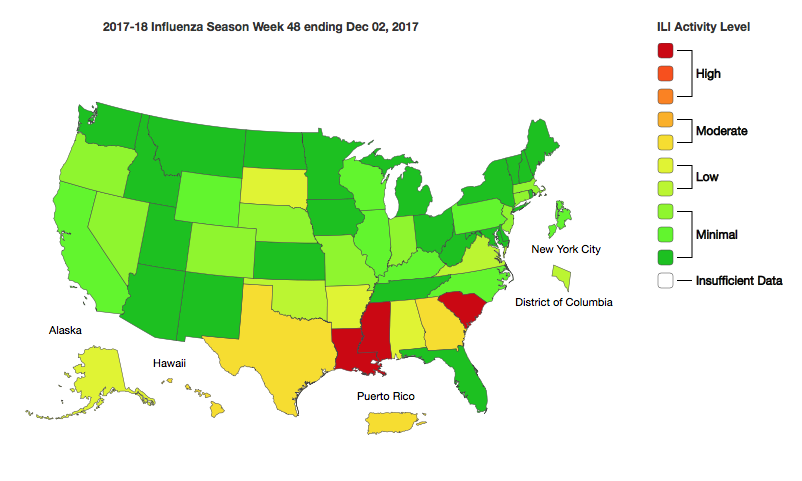 With the flu season already in full swing, early signs have shown that this year might be particularly bad. According to a recent report by The New England Journal of Medicine, this year’s flu vaccine may only be 10% effective. Also, the CDC’s US Flu Activity Map, as of December 2, shows the flu is “widespread” in Mississippi, Louisiana, Arkansas, Oklahoma, Georgia, and Virginia.

When the flu first started at Jackson Prep about two months ago, it seemed as though it wasn’t very bad, being overshadowed by upset stomachs and sinus infections. When asked about how the flu has presented itself, Ms. Brenda Whittington from the Junior High and Ms. Lelia Manning from the Senior High both said the number of flu cases has been low, with only a handful of kids becoming sick.

Even though the flu hasn’t hit Prep particularly hard yet, there have been other schools in the Jackson area that have not been so lucky. One such school is Tri-County Academy in Flora. The headmaster of the school said that roughly 20% of the entire school was sick with the flu at one time. This forced the school to shut down for an entire school week, giving students an extra week before Thanksgiving break.

Although the number of flu cases so far has been small, doctors still urge people to take proper precautions, such as washing your hands frequently and covering your mouth and nose when you cough or sneeze. By following these steps and getting a flu shot, you should be in pretty good shape should the flu come back later this season with a vengeance.