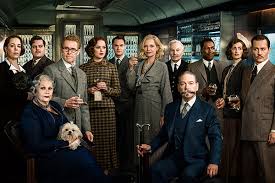 The movie opens by introducing the main character, Hercule Poirot, who is played by Kenneth Branagh. The viewer immediately understands the type of person this detective is and the role he will play in the plot.  The movie opens up with a scene from another Agatha Christie book. Although the opening scene is not originally from the book, it is still a very good introduction to the story.

Murder on the Orient Express has more twists and turns than a roller coaster. It keeps the audience guessing who the murderer is by constantly throwing new clues into the mix and revealing more about each character. It captures the viewer’s attention and keeps it throughout the entire movie. Tension is steadily built by discovering new clues and the interviewing of lying passengers until the atmosphere is as sharp as a knife. Stars such as Judi Dench, Willem Dafoe, Johnny Depp, and many others play the roles of the suspicious passengers. Even though the movie is set in the past, it has a polished, modern feel.

In short, Murder on the Orient Express is a spine-tingling murder mystery that makes one ponder the human notion of right and wrong and whether or not justice is truly served in the end.