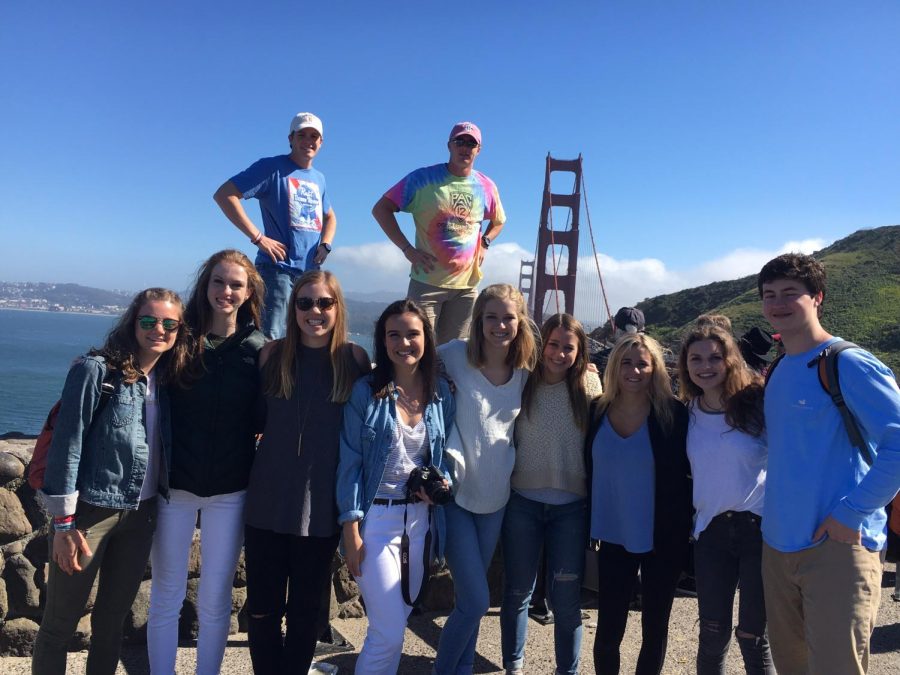 By Preston Dubberly and Henley Johnson

Jackson Prep’s National Honors Society recently took sixteen students to San Francisco, California for an educational and exciting vacation April 18-22.  The chaperones on this trip were sponsor, Lou Ann McKibben and Anna Griffin. Although the trip was short, it was jam packed with tons of walking, sightseeing, and good times.

The trip began with a college tour of the Stanford campus.  Prep alum, Elizabeth Hays Wood, who graduated in 1994, met the group at the student union because her husband runs Reformed University Fellowship (RUF) on campus.  After the tour, the group went to the San Francisco Dungeon, which was led by live actors who helped the group relive historical events while scaring them in the process.  Following the Dungeon, the group ate together at Boudin in Fisherman’s Wharf.

The next day, the group hopped on a boat to take them to the island of Alcatraz, the prison for serial killers in the late 1930s. Each person was given headphones and could set the pace for his or her tour that lasted roughly forty-five minutes.  After Alcatraz, the group was free to roam around Fisherman’s Wharf for lunch and regrouped in front of Pier 39 to head to the Exploratorium, a museum that allows people to experience hands-on science demonstrations. Although the Exploratorium had mostly children under the age of thirteen, Prep students enjoyed the experience the most. The highlight of the trip was getting on a hop on hop off bus after the Exploratorium to ride around San Francisco to see the Golden Gate bridge and other tourist attractions around the city.  Gordon, the tour guide, made the group laugh until they cried leaving most of the students gasping for breaths after his fun facts about the city. The day ended with a group dinner outside of Ghirardelli Square.

On Saturday, the group split into two so that everyone could see what they wanted.  The first group consisted of six girls who shopped around Union Square while the rest of the group went to the AT&T baseball stadium.  After lunch, the group came back together to go to Chinatown, so they could see another aspect of San Francisco life. The trip wrapped up at an Italian restaurant, Cioppino’s, where the group could reflect on the trip and prepare for the early morning of traveling to come.

Overall, the trip was ultimately a success.  Senior Anne Clark Harvey said, “My favorite part of the trip was riding across the Golden Gate bridge.”  This trip created many great memories for the juniors and seniors.