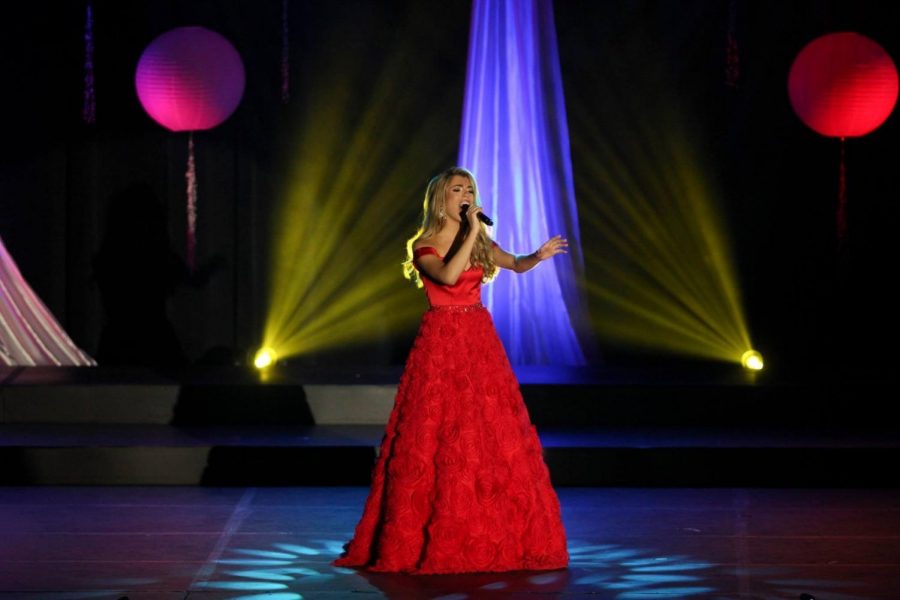 Tori singing "Tomorrow" in the talent part of the pageant

Five months ago, I embarked on a journey that changed the trajectory of my life. On November 5, 2017, I competed in my first pageant and, to my surprise, I won the crown and title of Miss Brandon’s Outstanding Teen. I had never seen myself as a stereotypical “pageant girl,” viewing pageants mostly as beauty contests. I soon learned that beauty is only a small percentage of the total package it takes to take home the crown.There are a total of four categories that each contestant must compete in. Those include talent (35%), interview (25%), evening wear combined with onstage question (25%), and fitness (15%).

​Immediately after winning my local pageant title, I began making appearances and working diligently on preparation for the Miss Mississippi’s Outstanding Teen pageant. A few of my favorite appearances included riding in the Brandon Christmas Parade and speaking at the city of Brandon’s father/daughter princess ball. These opportunities bolstered my confidence and really got me excited about going to Vicksburg for the state pageant.

​ For my platform I chose “Shining a Light on Special Needs”. The mission of my platform was to educate the people of our state on all the wonderful gifts and talents that our special needs community has to offer. Through no fault of their own, most people do not have much direct contact with special needs individuals. My passion is to see these barriers overcome by creating events and opportunities to bridge this gap.

​The state pageant took place in Vicksburg on April 28th and 29th. That weekend, I competed against 27 of the most beautiful and talented girls in the state. We had all worked tirelessly to prepare for this weekend from the time we were crowned in our local pageants. The first event was a private interview in a room with the 5 judges who would decide which one of us was most worthy to represent Mississippi in Orlando at the national pageant. To say I was intimidated sitting there by myself is an understatement. I was grilled about gun control, North Korea, our president, and my platform. As most of us are aware, there has been no shortage of controversial political discourse over the past year, so the range of questions we had to prepare for seemed limitless. This was something that really challenged me to do a better job of keeping up with current events in our state and around the country. I would say the general consensus among the contestants was that this was the most difficult portion of the pageant to prepare for.

​My favorite portion of the pageant was by far the talent competition. I sang a contemporary arrangement of “Tomorrow” from the Broadway musical Annie. I was very honored to place first in this portion of the pageant, taking home some scholarship money for my college education. I felt confident about the evening wear, onstage question, and fitness, but I was up against a large number of very talented girls. Saturday all 28 of us competed in two different preliminaries and then Sunday, the final day of the pageant, they announced the top 10. I was more than elated when they called my name out, sending me back through all 4 stages of the competition that afternoon. I felt good about my Sunday performance, but I was coming to the realization that my fate was in the hands of 5 judges and all I could do was my very best. The emcee, after what seemed like an eternity, announced that the final results were in. When they announced my name as second runner up, I was in absolute shock. Although winning is always the goal, I had set my sights on making the top 10, especially being new to the pageant scene.

​I would say that this entire experience taught me so much about work ethic, relational skills, and serving others. I am not sure what the future holds for me in the pageant world, but I know that God will give me guidance and wisdom going forward. I am so blessed to have had the opportunity to meet so many wonderful people from all over this wonderful state and hope to return to Vicksburg in 2019.