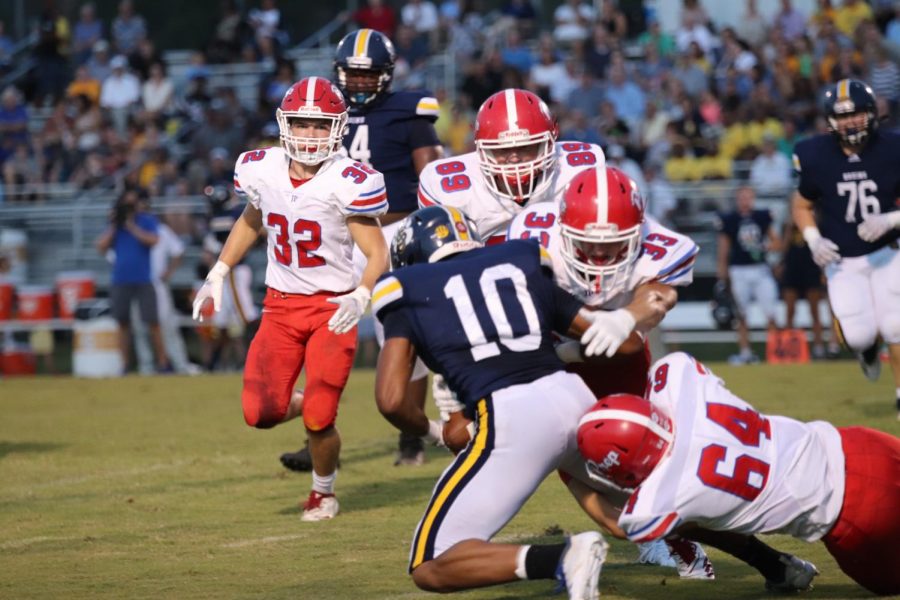 Madison, MS — Last Friday, for the first time ever, and for only the second matchup between these two teams ever, the Patriots traveled to Madison to take on the St. Joseph Bruins at home. Last year, the Bruins came to Prep as a first-time opponent, so this year the Patriots traveled. In this 59 – 10 dominant performance, Prep controlled the ball on both sides of the field throughout the game.

There was a very evident improvement in performance and mentality after the previous week’s performance against Pillow. Even without star running back Jerrion Ealy, the offense put on a show led by the backfield. Sophomore Matt Jones took his place and had a night, ending with 78 yards total and one touchdown off five carries. After that, senior Angelo Levon and sophomore Seth Cook took over. Levon ended the night with multiple carries and two touchdowns. Cook took over after him with four carries and a touchdown.

Defensively, the Patriots dominated as well. Even with seniors Adam Norsworthy, JP Guilbeau, Carter Stockett, and Nick Sanford out due to injuries, the defense stepped up and delivered once again. With five total interceptions and four of them returned for a touchdown, it is safe to say that the defense had no troubles filling in spots.

This week, the Patriots take on the PCS Bobcats at home for a big-time matchup. Game: Friday, September 21 @ 7. Patriot Field.