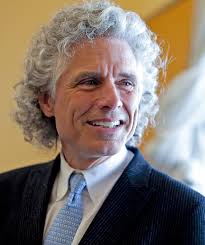 We see news of mass shootings more and more often. Thus, rates of violence must be increasing. The world’s wealthy are growing exponentially richer, leaving everyone else in the dust of their poor, miserable existences. We are constantly on the brink of a catastrophic war.

Not so, actually. Steven Pinker, a professor of psychology at Harvard, shows in his book Enlightenment Now: The Case for Reason, Science, Humanism, and Progress, that a large proportion of our available data indicates the polar opposite of the mindset that has come to colonize the public mind.

He argues that these large swaths of improvement have been as a result of the propagation of Enlightenment values (the reason, science, humanism, and progress of the book’s title), and the data bear this out.

The book is far from a bland collection of graphs, though. Pinker’s lively style keeps readers entertained while simultaneously fascinating them with the mind-boggling upward trends occurring across multiple facets of human society.

Pinker highlights a trend in Chapter 16 (titled “Knowledge”) called the Flynn effect. It demonstrates how the average IQ of the population has been steadily rising for the past one hundred years. From 1909 to 2013, Pinker shows that the average IQ for the world’s population has increased between 25 and 30 points. Pinker points out, though, that this increase has not been an increase of “overall brain power”, but of an “analytic mindset”, or the ability to place concepts into categories, thinking of objects in terms of their parts and relationships, and “placing oneself in a hypothetical world defined by certain rules and exploring its logical implications”.

Rates of infectious disease have taken a nosedive in the past few decades alone. Pinker demonstrates, for example, that the number of children under age 5 who die from pneumonia has fallen from just short of 1,750,000 at the turn of the millenium to around a million in 2013. While a million is still a large number, a decrease of 43% in just thirteen years is a phenomenally hopeful statistic for those fighting to eradicate infectious disease. Similar percentage decreases in child death from diarrhea, malaria, and measles have been achieved as well.

Large-scale war between “great powers” (defined by Pinker as “the handful of states and empires that can project force beyond their borders, that treat each other as peers, and that collectively control a majority of the world’s military resources”) has decreased dramatically in the past five centuries. Five centuries ago, these great powers were almost constantly at war (75%-100% of the time). A steep drop in this percentage occurred at the turn of the 1800s (from around 60% to almost 0% of the time), and it has not even come close to reaching that same number since (The two World Wars accounted for around 25%).

The number of democracies in the world has increased substantially in the past 200 years. Pinker provides a graph in which all the nations of the world were assigned an autocracy vs. democracy score (between -10 and 10), and the averages for each year between 1800 and 2020 were shown. Between 1800 and 1920, the average score increased from around -7 (a large majority of governments being autocratic, a system of government where one person holds absolute power) to about a 2. The average score dipped for the remainder of the 20th century, but a substantial upshoot to a score of around 4 has been occurring since the turn of the 21st century, and it only appears to be increasing.

With dazzling humor and intricate detail, Steven Pinker demonstrates brilliantly (and in less than 500 pages) how the values put forth by the Enlightenment have spearheaded staggering developments in just about every aspect of human life, from increases in quality of life to the slashing of infectious disease rates across the globe. For anyone who thinks that we are on a path to destruction, that human beings are destroying the planet, that the fabric of society is crumbling fast, or if you are simply curious as to how we as humans are actually doing, I strongly suggest you read this book. It will almost certainly give you hope for the future of humanity. 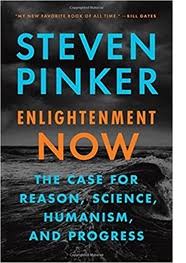