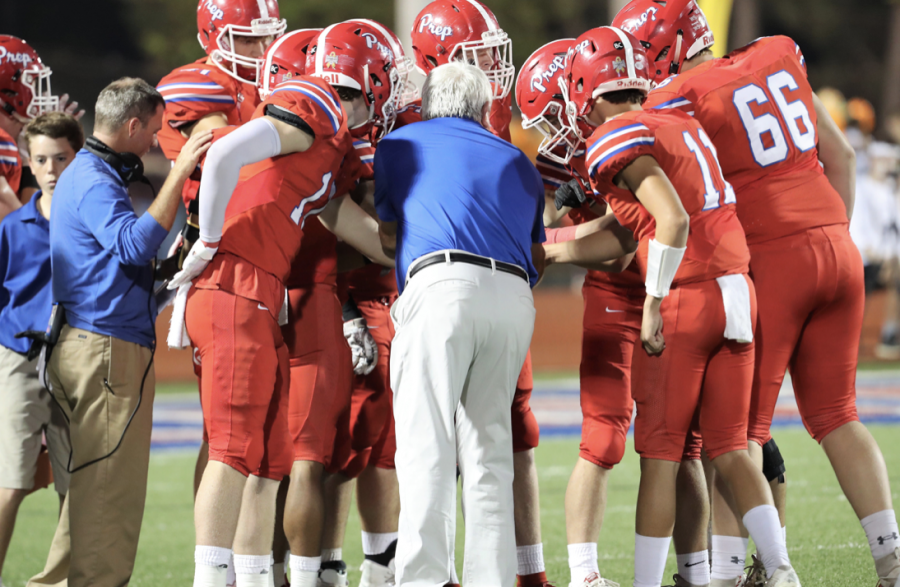 Flowood, MS — This past Friday, September 28, Prep played its cross-town rival–the Jackson Academy Raiders. This was arguably their toughest challenge of the season so far. The first quarter was tight, but thanks to a big night from Jerrion Ealy and a relentless Patriot defense, Jackson Prep was able to keep their 22 game win streak alive as they knocked off JA 35-13.

On the first drive of the game, the Raiders marched 75 yards over 6 minutes and connected with their talented running back for a touchdown and the early lead. Responding quickly, Jerrion Ealy took it to the house for a 65-yard touchdown. The score was 7-7 at the end of the first quarter, but it wouldn’t stay like that for long. Jackson Academy rushed in for a 13-7 lead shortly thereafter. There was a sense of worry and confusion on the Jackson Prep sideline because, before this game, Prep had never trailed a single team all season. Coach Black and the offensive staff quickly realized that it was going to take some special plays from number two (Jerrion Ealy) in order to keep the streak alive. Jake Lange, who made his first career start Friday night, pitched the ball to Ealy who turned on the afterburners for a 68-yard touchdown. The score was 14-13 with Prep on top, but that still wasn’t a comfortable situation to be in. To answer the call, Ealy took a Jake Lange tunnel pass to the house for another touchdown right before halftime. The score was 21-13 at halftime.

After halftime, the Patriots came out with even more fire than when they started with. Thanks to a huge perimeter block by senior Ford Lange, his little brother, Jake Lange, was able to connect with senior wide receiver Spence Graves for a 75-yard touchdown putting Prep up 28-13 late in the third quarter. Ealy scored once again to make the final score 35-13. Prep finished the game with 446 total yards, and 321 of those came from Jerrion Ealy. Jake Lange handled the pressure well but made a few errors down the stretch. Thankfully those turnovers didn’t result in any points for the Raiders so hopefully, he can learn from those mistakes.

The Patriots host the Oak Forest Yellow Jackets for homecoming this next week. Tune in for a preview of Friday night’s game later on this week.