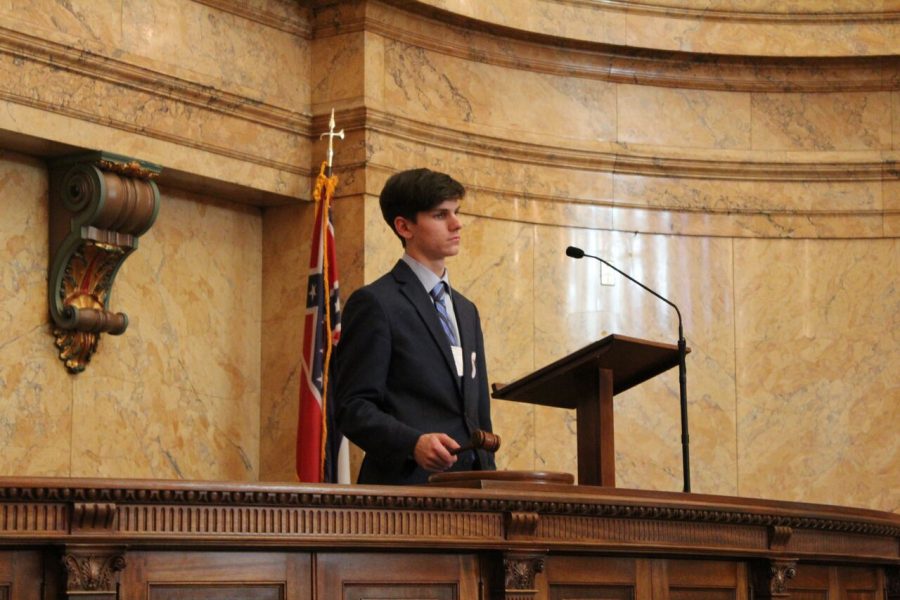 Next year's governor, Alex Stradinger, presiding over a chamber at Youth Legislature.

From November 14 to November 17, Prep students attended the Mississippi Youth Legislature Conference at the Marriott in downtown Jackson. Each year, the Mississippi Youth Legislature comes to session as a model legislative and judicial program for students in grades 9-12. For this conference, students from both public and private schools across the state come together in both our former and current state capitols to participate in a mock legislative session.

Students have the opportunity to participate as either a legislator, attorney, lobbyist, press delegate, or legislative page. Each delegate brings with them a piece of legislation that they debate through the legislature with the goal of having it signed into “law” by the Youth Governor at the end of the conference.

Each piece of proposed legislation, or bill, goes through the full legislative process. The bills must first be passed through their assigned committees before being debated on the floor of the House or Senate. They are often amended, combined, or tabled, just as in the actual Mississippi legislature. The leadership for the conference also comes from the students; annually, each session elects a full cabinet of officers that serve over the next year’s Youth Legislature. In addition to floor and committee debates, students also get to experience other aspects of the political system such as voting on legislation and campaigning for a candidate from their school.

This year, Prep had the honor of having two of its own students, juniors Alex Stradinger and Elizabeth Downing, elected as Youth Governor and Speaker of the House for next year’s conference, respectively.

In order to be elected governor, Alex went through the complete process of running for a government position; he campaigned with stickers and posters, gave speeches, and debated with the opposing candidates. Alex said, “Becoming Governor was a stressful and strenuous process, but it was well worth it. Youth Legislature as a whole has helped me to understand the importance of confidence in yourself and a willingness to help others. I’m extremely excited about getting to be a big part of running the conference and understanding our state government even better.”

At the close of this year’s conference, senior Anna Katherine Cooper and sophomore Cass Rutledge received Outstanding Representative awards, which our delegation hopes to see many more of in the future.