OPINION: The dangers of the rise of Antisemitism and BDS 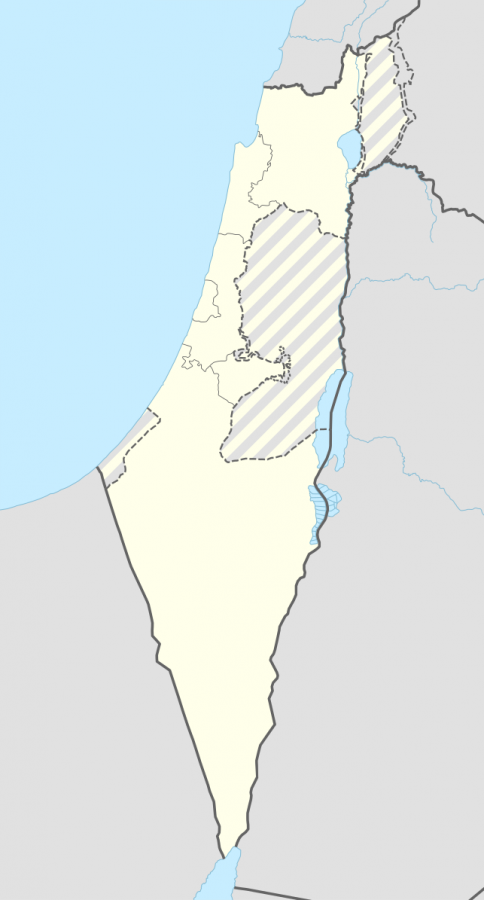 The state of Israel with occupied territories in stripes.

US Representatives Rashida Tlaib (D-MI) and Ilhan Omar (D-MN) were recently denied access to visit Israel by its government. The mainstream media immediately said that Israel cannot take criticism and is oppressive to Muslims, leaving out all information that did not fit its narrative.

Both Tlaib and Omar, members of “The Squad,” a group of four influential hardcore left wing freshman congresswomen, support BDS—Boycott, Divestment, and Sanctions. BDS is a movement that aims to end Israeli occupation of Arabic territories and to guarantee equal rights to Palestinians. Both of these goals are very misleading. The land legally belongs to Israel and houses major cities like Tel Aviv. Palestinians are given the same rights as Israelis. In fact, they serve in the government and military, can practice their religion freely, and have the same rights as Jews. The real goal of BDS is to isolate Israel economically, leaving them vulnerable to terrorists, who regularly fire rockets at Israel and to ultimately destroy the only democracy in the Middle-East.

Wikimedia CommonsThe state of Israel with occupied territories in stripes.

Ironically, Omar brought up the boycotts of Nazi Germany to argue for BDS. You should know your logic is flawed when you compare a regime responsible for the mass genocide of 6 million Jews to Israel. Earlier this year, Speaker of the House Nancy Pelosi (D-CA) said that BDS was “bigoted” and “dangerous.” Speaker Pelosi, a liberal herself, even recognizes the blatant antisemitism of BDS.

Omar, especially, has a troubling, blatantly antisemitic history that has been largely ignored by the Democratic Party. She tweeted that “Israel has hypnotized the world” and that “[American support for Israel is] all about the Benjamins.” To Omar’s credit she did apologize, only reverse her apology, saying she does not regret her words. Most recently, Omar has called Israeli Prime Minister Benjamin Netanyahu’s “existence” a threat to peace. No, she did not say that about the leaders of the Taliban, Iran, or Iraq; she said this about the leader of Israel.

Tlaib has accused United States legislators of dual loyalty, which is accusing people of supporting Israel over the United States due to race or religion, a classic antisemitic trope.

Israeli law states that anyone advocating for BDS and the destruction of Israel cannot enter. This is not the first time someone has been barred from entering a country. Under the Obama-Biden Administration, a member of the Knesset, the Israeli parliament, was not allowed to enter the United States. Laws like these are commonplace and are not unique to Israel.

Tlaib, who has a 90-year-old grandmother living in Israel, was recently given permission to visit her, but Tlaib refused because not voicing her support of BDS and criticism of Israel during an official visit to Israel would “kill a piece of [her].”

After being denied entry to Israel, Tlaib and Omar posted a cartoon of Prime Minister Netanyahu and President Trump trying to silence Tlaib and Omar drawn by an artist who once placed second in a Holocaust-denial cartoon contest. Even after this, Democrats, including the “moderate” 2020 Democratic presidential frontrunner Joe Biden, came to their defense.

It is truly disgusting that Ilhan Omar and Rashida Tlaib have become the faces of the Democratic Party, getting massive amounts of media coverage, from being on the cover of The Rolling Stone or being featured in Vanity Fair, both magazines that would never give that kind of publicity to a Republican. House Democratic leadership routinely comes to Tlaib and Omar defense to cover for outrageous comments to the point that Pelosi appears to be the speaker in name only.

Israel is the only democracy in the Middle East and a frequent target of terror attacks and missile strikes from its neighbors, yet Omar and Tlaib advocate for cutting off Israel’s foreign aid, weakening it to the point of nonexistence. Why not boycott and rally against middle-eastern, terrorist-sponsoring nations that do not give their citizens equal rights, like Syria or Iraq? The only valid explanation for this hatred is antisemitism.

Sadly, this has become the new normal for the Democratic Party, but, thankfully, President Trump has continued to support Israel time and time again. Whether President Trump was recognizing Jerusalem as the capital of Israel, moving the US embassy there, or exiting the disastrous Iran Nuclear Deal, he has unwaveringly supported our greatest ally, Israel, and will continue to do so.