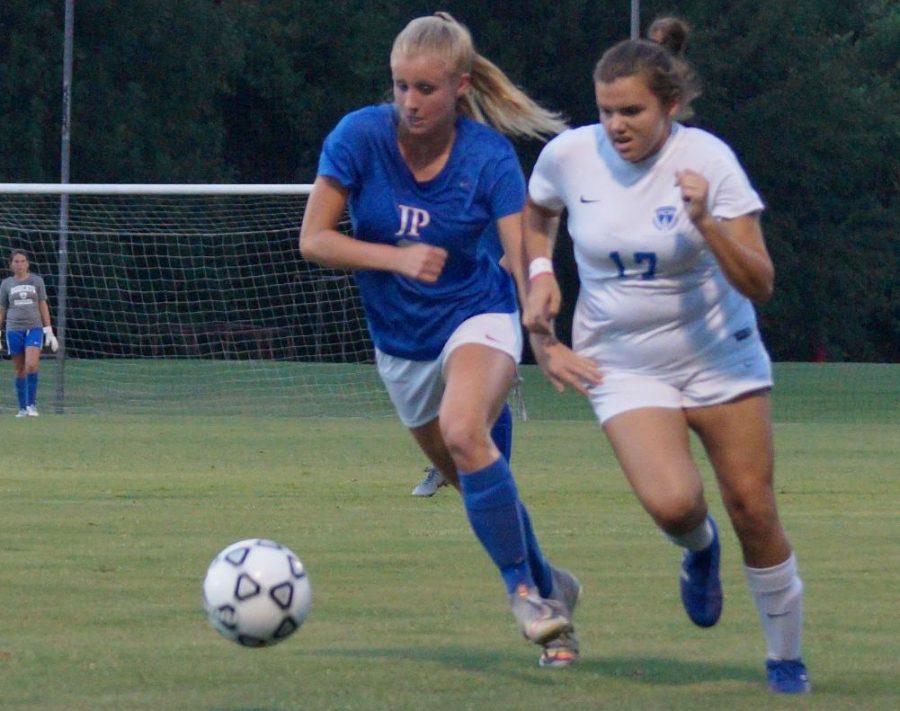 Senior Cassidy Zummallen headed down the field to score a goal against PCS in the semifinals.

After 4 years, the girls’ soccer championship trophy is officially back home. The girls’ soccer season came to a close Saturday, October 5th,  when the Jackson Prep team beat JA 2-1 in the State Championship. JA has been on top the last several years but no longer do they remain the champions. It was a rough weekend for the Raiders, getting beat by Prep in both football and soccer.

The new season kicked off towards the end of last school year, with the team having several practices prior to summer. Once June arrived, practices and scrimmages were in full swing. After tryouts were held in July, the season and the chase for the playoffs had officially begun. The varsity team started off the season strong, going to one of two tournaments in Collierville, TN and winning all 3 games. Prep had not gone undefeated in this tournament in quite some time, so high expectations for this team were quickly set. The regular season began, and the varsity team achieved a major win against MRA, who Prep would defeat a second time later in the regular season. The first of two JA games in the regular season was approaching and anticipation was rising, considering the Raiders had won the last couple years. JA ended up beating Prep at the Brickyard. The Raiders would go on to beat Prep a second time after going into overtime.

Prep took on PCS in the playoffs, beating them convincingly. JA and MRA played one another in the semifinals and JA won 2-1. MRA had beaten JA twice already in the regular season, so some expected MRA to win again. There was one game left for the Patriots at home. Prep and JA would face one another yet again in the State Championship.

The Patriots got an early lead, going up 2-0 in the first half. Seniors Maggie Muenzenmay and Anna Grace Morgan both scored goals. JA scored a goal in the second half.  With only a 1 goal lead, tensions were high. JA was trying to get another goal to tie the game up, and Prep was trying to hold onto the lead. Prep ended up maintaining the lead and celebrating the return of the title. Head Coach Jon Marcus Duncan couldn’t be happier saying, “This was a special team from start to finish. Every player was bought in on our ultimate goal of winning a State Championship.”

The Varsity team ended the season with 19 wins, 2 losses, 75 goals scored, and 6 goals allowed. Senior Anna Grace Morgan reflected on her soccer career saying, “I’ll never forget the friendships I’ve made and the memories I have. These years playing for Prep have been so fun and I am so sad I won’t be out there anymore.” Cassidy Zummallen will continue playing soccer at Mississippi College saying, “Ending my high school career by winning State was the best way possible. Now, I’m really excited to move on and play at the next level in college.”  Four seniors participated in the MAIS All Star game including: Cassidy Zummallen, Anna Grace Morgan, Campbell Perkins, and Maggie Muenzenmay. Several young players have contributed to the team’s success, including 8th grader Vail Wartes and freshmen Grayson Dausman, Kelsey Clay, Anders Morgan, and Bradley Carter. Having younger girls like these step up will help mitigate the loss of the six seniors. The chase for another championship will soon begin.