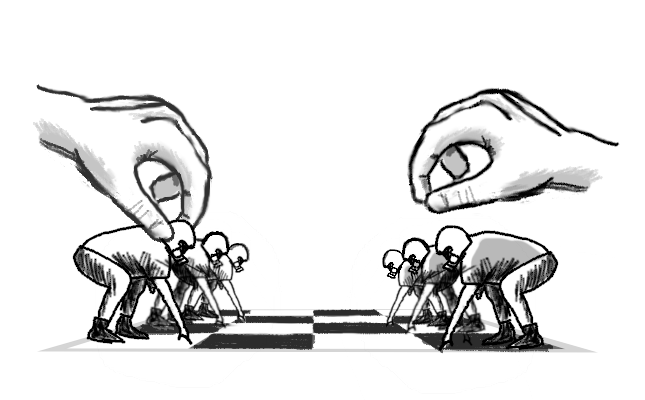 The question of whether or not chess is a “sport” divides the staff. (Illustration by Alex Roberson)

The question of whether or not chess is a “sport” divides the staff.

Is chess a sport?

This article was initially intended as a pro-con debate, but the Editors of the Sports Section, who are of the opinion that chess is not a sport, chose not to defend their side of the argument.  Clearly, they need your help, so please weigh in.  Write a Letter to the Editor to us at [email protected]

The Sentry has published a number of articles on chess in its last few issues.  During that time, an argument has arisen over where those stories should be published–in the “News and Features” section or in the “Sports” section.  To make the most of this frivolous staff dispute, I am writing to explain why chess is, in fact, a sport and why chess articles belong in the Sports Section.

What is a sport, and how does chess stack up to sporting parameters?  Well, “sport” can roughly be defined as a competitive activity involving physical exertion, training, and skill in which an individual or team competes against another or others for entertainment.  Let’s break that down point by point.

Is chess a competitive activity?  This is an obvious yes, even on a casual level.  Every activity and lunch period, dozens of students pour into Dr. Smith’s classroom to play and win. This competitive spirit is even more profound at the highest levels of play.  Storied rivalries between two chess international grandmasters are every bit as dramatic as those in football, soccer, or any other sport.  The match between Bobby Fischer and Boris Spatsky pitted Cold War rivals, the US and USSR against each other, was as intense as any other Cold War era Olympic contest.

Does chess require physical exertion?  Once again, the answer is yes.  While one may not burn a huge amount of calories at a casual chess game with  friends, a day of tournament chess can burn thousands of calories, even at the scholastic level.  An ESPN article stated that chess grandmasters Magnus Calson and Fabiano Caruana burned between 6,000 and 7,000 calories per day during their championship match, roughly three times what the average person burns in one day.  The 1984 Chess World Championship ended prematurely when the defending champion, having lost 22 pounds during the competition was no longer physically able to continue.

Does chess require training?  Of course it does.  Here at Prep we have a chess class and club to train better players.  At the highest level, grandmasters train for over twelve hours a day in preparation for a tournament.  Players study their opponents and develop strategies and plans to beat them, not unlike when the football team watches film.

And lastly, does chess require skill?  It certainly does.  More skilled chess players are better than those with less skill.  Skill level is what separates grandmasters, the professional stars of the chess world, from “E-class” players who have only just learned the rules.

Chess may not involve moving hundred pound chess pieces across a “chess pitch”, but that doesn’t make it any less a sport; I hope this article was able to reveal more about chess to you.  In the meantime, look for our future chess articles in the “Sports” section of the paper . . . where they belong.