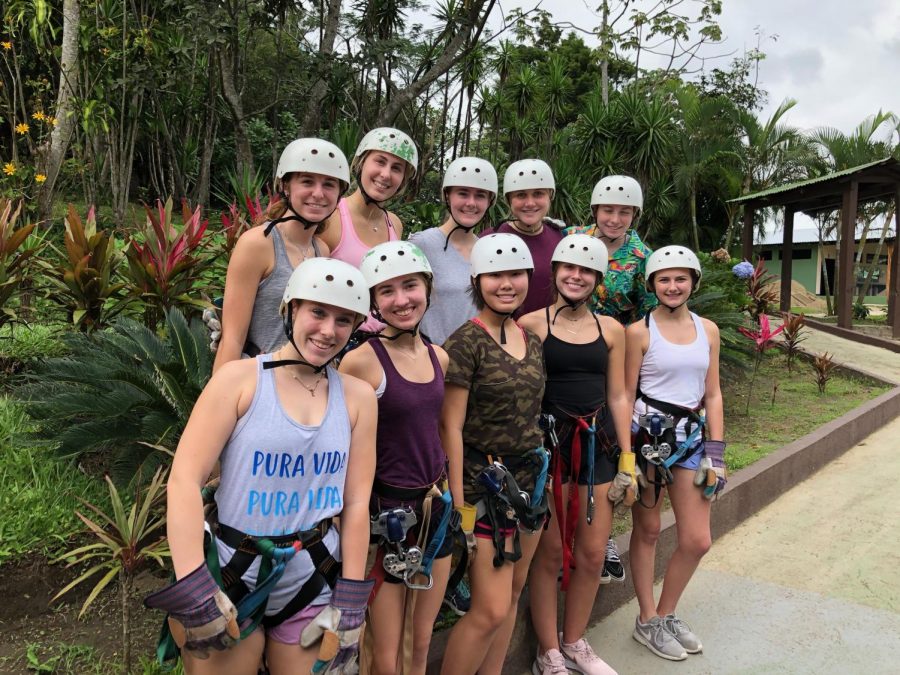 On November 20th, ten students traveled to Costa Rica, chaperoned by Ms. Katie Luckey and Ms. Suzanne Eskrigge. Surprisingly, the trip ended up being all girls. Students left the Jackson airport around 2:30 pm and arrived in Liberia, Costa Rica by 10 pm. Costa Rica and the United States are located in the same time zone, so everyone was exhausted. After a long day of travel, the students finally arrived at the hotel, checked in, and went straight to sleep.

The first three days were spent in Guanacaste. Students visited a sustainability workshop where they learned how to make traditional Costa Rican food. After the workshop, students were then given a tour around a farm where they had the opportunity to milk a cow. Students then went on seven long zip lines and had a delicious lunch. The next activity was visiting a thermal spring. Everyone got into their swimsuits and went into a place similar to a sauna. They then put hot mud all over their bodies, let it dry, and washed it off.  The girls then swam in three heated pools, which was very relaxing.

The third day was very chill, filled with snorkeling and visiting souvenir shops. While snorkeling, students saw sea turtles, sea horses, and even pufferfish! After much rest and a good night’s sleep, students visited the Arenal Region and the Rincon de la Vieja National Park. That day was very hot and the students probably hiked for almost two hours! No one was ready for that. The fifth day we traveled to Los Chiles where we went on a boat tour of Cano Negro Wildlife Refuge. The students saw monkeys, iguanas, sloths, crocodiles, the Jesus lizard, and even a water buffalo. The last day was spent in San José where students visited La Fortuna waterfall. The hike to the waterfall was one thousand steps that winded everyone. But once everyone arrived it was breathtaking. After the waterfall, they visited a coffee plantation. It was very fascinating to see how much work and time it takes for the coffee beans to actually grow and then picked. Students even were allowed to buy coffee grinds and chocolate to bring back home.

Madeleine Conerly, a junior who attended the trip, said, “What struck me the most about Costa Rica was how happy and stress-free the people are there. You see this when people say ‘Pura Vida,’ meaning pure or simple life, when saying hello, saying goodbye, or saying something is great. Definitely add this amazing place to your bucket list.”