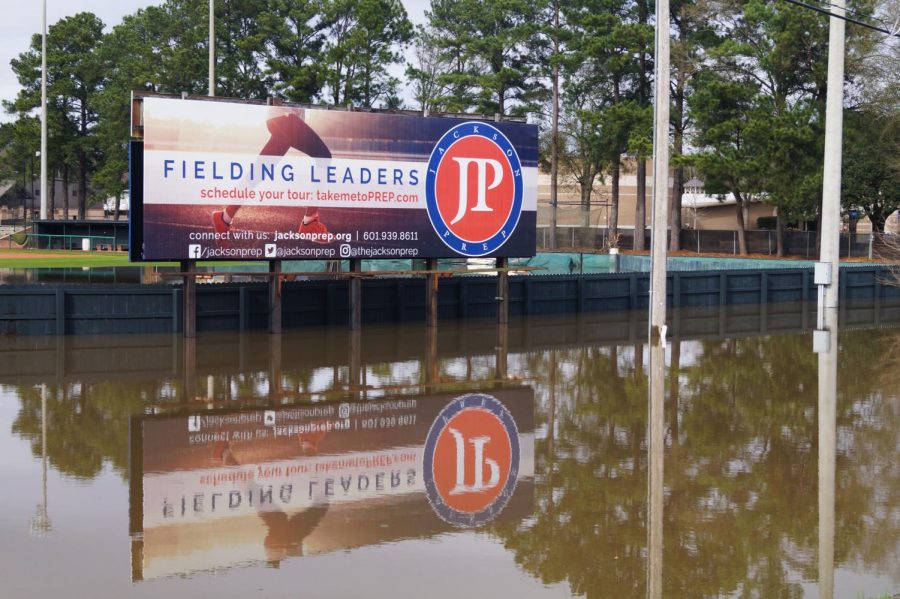 The view from Lakeland Drive as it became more lake than land.

As if the rains from this past fall were not enough, 2020 brought nearly 20 inches of rain to Jackson’s already-saturated soil and finally sent the Pearl River over its banks. The February 17 crest of 36.67 feet, the third-highest in recorded history, sent water into areas it has not been in in 37 years, including parts of the Jackson Prep campus.

Prep experienced flooding of several athletic fields, including complete inundation of the soccer, softball, and both football practice fields, and partial inundation of the baseball field and tennis courts. The band field, on the east side of campus, was also partially covered. Fortunately, no buildings took on water, with the exception of a few athletic sheds and the softball concession stand.

Speaking of the flooding taking place at Prep, Head of School Mr. Lawrence Coco said, “I appreciate the administrators monitoring the weather and giving up their long weekend.” He also said, “Once we start breaking 38 feet, we have a problem. The crisis plan is to sound the alarm and mobilize the troops by getting stuff off the floor, making sure technology is safe and put away, and retrieving books from lockers.”

On the other side of the river, however, many homes sustained damage. Hundreds of homes in Jackson were flooded, with several inches of water inside. The hardest-hit areas were in northeast Jackson, along with the Hightower neighborhood near downtown Jackson.

In northeast Jackson, homes in the River Road and North Canton Club Circle areas were the first to take on water, followed by homes in the Rollingwood subdivision on Yucca Drive and Rollingwood Drive. The Westbrook Road area was also affected, with the road itself and many other adjacent roads covered in floodwaters. Streets in Eastover, Twin Lakes Circle and Pebble Lane, were also impassable due to flooding.

Prior to the flood, Jackson mayor Chokwe Antar Lumumba ordered a mandatory evacuation of certain areas of northeast Jackson. Most heeded the order; but others stayed and some had to be rescued from their homes. Other citizens, primarily in Eastover, evacuated voluntarily, renting moving trucks and sandbagging their homes in the event that their homes took on water.

The city of Jackson was not the only area affected by the flood of 2020. In Ridgeland, the Harbor Pines mobile home community was in danger of flooding, prompting a mandatory evacuation order by mayor Gene McGee. South of Jackson, in Byram, a water rescue was necessary near the Swinging Bridge due to a man’s boat sinking. He was not injured.

With the flood season approaching and a stagnant weather pattern not budging, it remains to be seen if the river will stay at bay for the rest of the year.