A Season in Review: Girls’ Basketball

This story is part of a series detailing seasons that finished before the coronavirus postponement. 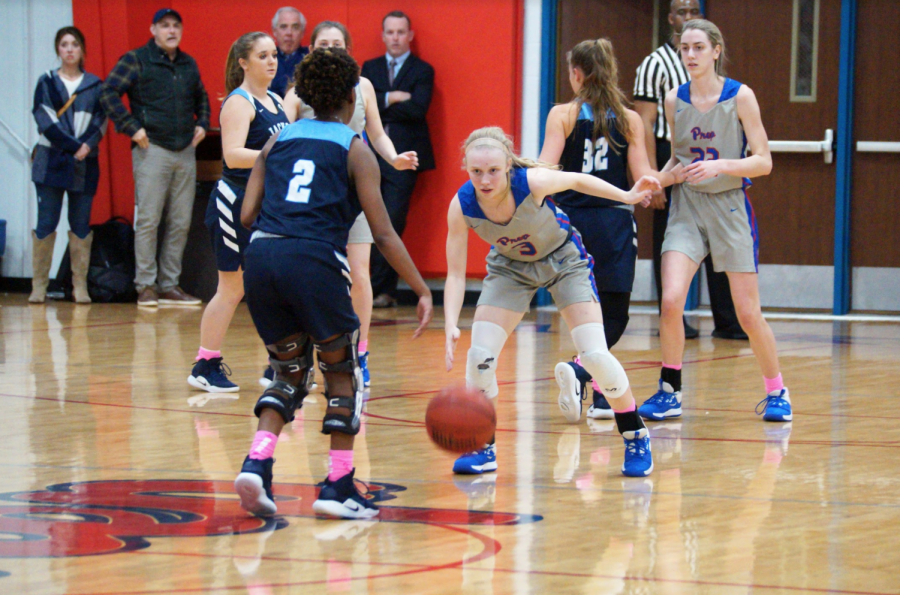 Sophomore guard Andie Flatgard stops her opponent near the half-court line during the regular season.

Taking a look back at the 2020 Jackson Prep athletic calendar, we can see that the year has been dotted with state championship appearances. Perhaps the most exciting title run came from the girls basketball team, who caught fire in the MAIS State Tournament. Together, the group of fourteen pushed through the regular season and, like all great teams, shined brightest on the biggest stages.

By simply looking at the roster, it is easy to spot an essential characteristic: leadership. The squad was led by 6 seniors: Caroline Dreher, Campbell Perkins, Anna Grace Morgan, Julia Zouboukos, Mackenzie Shoemaker, and Allie Wise, all of whom excelled in their respective roles. As a result of their experience, the Patriots brimmed with grit, confidence, and composure, qualities that would serve them well down the line.

This did not exempt the girls from a very challenging regular-season schedule. Their 22-9 record indicated just how talented they were; however, two obstacles still stood in their way. These obstacles were division rivals MRA and JA, who narrowly defeated the Patriots in the regular season. But it would not stay like this for long.

Entering the 5A State Tournament at Parklane Academy, the Patriots seemed to shift into the next gear. Coach McAnally and his fourteen got the wheels rolling early with a 58-39 dismantling of Copiah Academy. However, their momentum did not slow after their first-round win, propelling them into a tough matchup against JA. Expecting to see a team resembling the one they had defeated in the regular season, the Raiders were caught on their heels as the Patriots pulled away late with a 45-35 victory. Finally, the team was within distance of etching their names in the history books. Neither MRA, history, nor the big stage could keep this resilient bunch from hanging a banner of their own. Propelled by all-tournament performers Olivia Sasser, Campbell Perkins, and Julia Zouboukos, the Patriots brought the trophy home for the first time since 2006 and seventh time in program history with a gritty 49-44 win.

Having already had an extremely successful year, the team looked towards the Overall State Championship for more. The Patriots streaked through the bracket, reaching the finals after a thrilling overtime win against Hartfield Academy. Unfortunately, Prep was unable to conquer Pillow Academy in the Overall State championship.

The accomplishments of this year’s girls basketball team are truly astounding. They showed just how much a tough and complete team can do. It is nice to know the gym will have a new banner. To the entire 2020 girls basketball team: thank you for the unforgettable season.