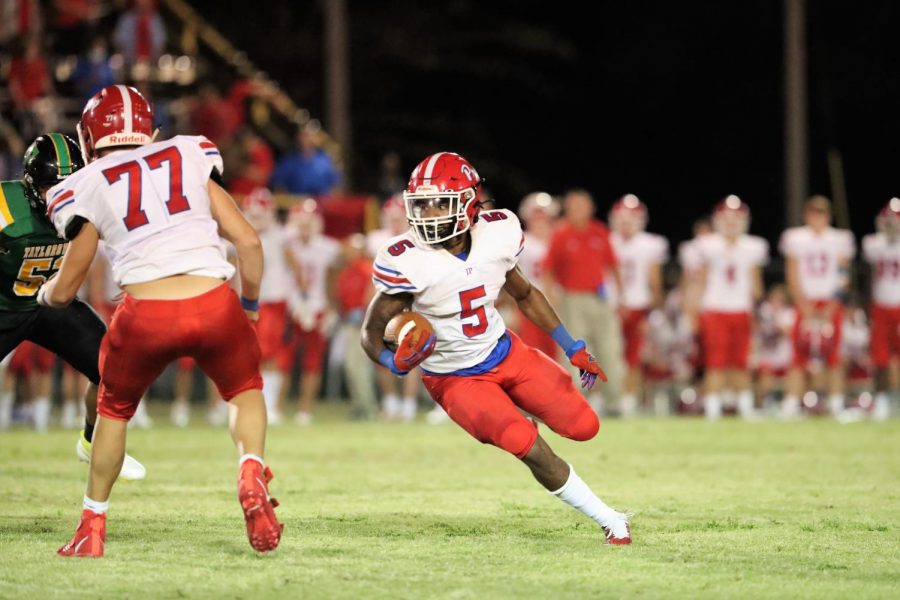 Matt Jones scans the field from behind his Oakley visor. Photo courtesy of Beverly Oden

On Friday night, the Jackson Prep Patriots played their fourth game of the young 2020 season in Taylorsville, Mississippi. The hometown Tartars were patiently waiting to combat the Patriots’ charge, dreaming of revenge after last year’s skirmish in Flowood. Taylorsville found their revenge on Friday night, outdueling Prep in a 47-37 offensive shootout.

After the opening kickoff, it was easy to see the amount of talent that the Taylorsville offense possessed. Senior quarterback and Tulane commit Ty Keyes led his teammates up and down the field with relative ease on their first three drives, completing passes and scrambling as a four-star quarterback should. Keyes’ success through the air propelled his squad to a 21-0 lead in the first quarter. The Patriot defense held their ground against the Tartars’ inside running game but was unable to keep up with the with Taylorsville in the secondary. Prep’s offense stumbled out of the gate, as Riley Maddox’s first two interceptions stopped several drives short.

Taylorsville began the second quarter with positive momentum and positive field position. The home team quickly capitalized on the opportunity, the scoreboard blinking along with a head-scratching 28 point margin. The Patriots’ first sign of life came in their fourth drive, with the running game gaining a little bit of traction. However, the ball was in Keyes’ hands once again after a punt. Prep’s defense confidently snatched the reigns away from Taylorsville with a rejuvenated pass rush, forcing a three-and-out. As seconds fell off Taylorsville’s green scoreboard, the offense hit the gas pedal. Matt Jones reversed field for a rushing score, Luke Williams scampered into the endzone on a wheel route, and Louie Gatlin centered up a 46-yard field goal to make the score 28-17 as both teams headed to their locker rooms.

Coach Black’s halftime message seemed to have hit home. The Patriots returned to the field with an abundance of sideline energy, erupting with shouts as Matt Jones hit sixth-gear on an 80-yard touchdown run. The defense did their part, too, stopping the Taylorsville passing attack. With the ball again, Braedon Mabry capped off another successful, handoff-fueled dive with a seven-point fullback dive. Mabry then kicked off and moved to linebacker, witnessing another defensive stop as the Patriots routinely closed in on Keyes in the pocket. But, Prep lost their grip on the games’ momentum and their 31-point swing after a Riley Maddox interception and a Ty Keyes touchdown. However, senior fullback Chris Peale continued the fullback-scoring frenzy with a lumbering touchdown of his own. The third quarter ended with Prep holding a 37-35 lead.

The Tartars responded in the fourth and final quarter. Said response began as the home-town running back bowled his way into the endzone on a pitch play. Unfortunately, the Patriot offense could not respond, battling an ungodly number of muscle cramps and rolled ankles as the marathon of a game trudged onward. Scoring once again, Taylorsville sealed the game at a score of 47-37.

I think that the initial reaction from anyone that watched this game would be simple: “Wow.” Prep battled their way out of a huge hole but was unable to gut out a victory when the game turned into a track meet. So, make sure to support the Patriots as they take on Jackson Academy next Friday in a metro-area showdown. The game against the Raiders may be the most important matchup of the season so be there for Prep when they need it most.