And then there were two: Chiefs take on Buccaneers in Super Bowl LV 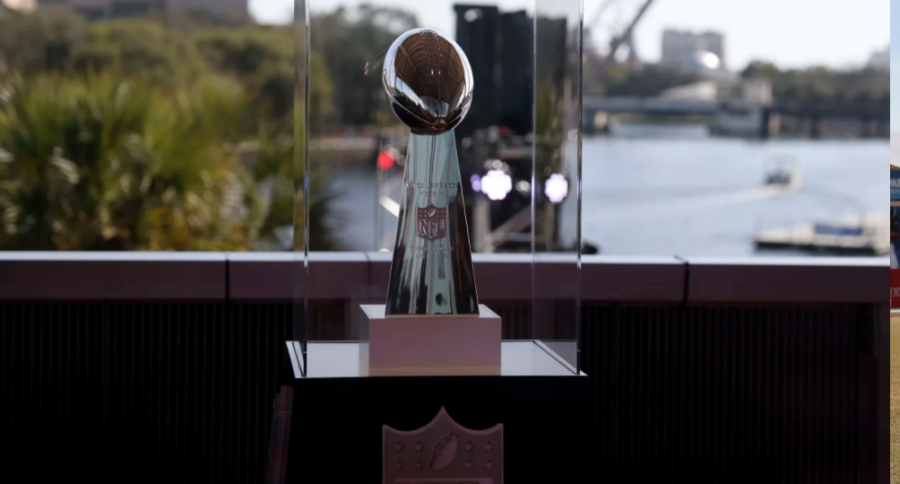 The Lombardi Trophy awaits its owner in Tampa Bay. Photo by Ben Liebenberg and NFL.com

After a long and very unusual NFL season, the playoffs are finally here. Wild Card Weekend showcased a full slate of 6 great games.

In the AFC, the Buffalo Bills, looking to win their first playoff game in 26 years, played the Indianapolis Colts. The Bills’ explosive offense, led by MVP candidate Josh Allen, was too much for the Colts to handle.

Staying in the AFC, the Baltimore Ravens looked to finally get their first playoff win with reigning league MVP Lamar Jackson at quarterback. They faced off against the same team that eliminated them last season, the Tennessee Titans. The Titans are carried by star running back Derrick Henry, who rushed for over 2,000 years this season, capturing his second straight rushing title. The Ravens finally got over the playoff hump, winning the game 20-13.

Switching conferences to the NFC, the Los Angeles Rams squared off against the Seattle Seahawks in a west coast battle. The Seahawks won the division with a record of 12-4. The Rams came in second with a 10-6 record. The Rams were led by rookie running back and Clinton, Mississippi, native Cam Akers as he rushed for 131 yards on 28 carries. The Seahawks offense could never quite get going as they failed to put up points in the 30-20 loss.

Down in New Orleans, the Saints played against the Chicago Bears. The Saints defense, led by linebacker Demario Davis, cornerback Marshon Lattimore, and defensive end Cameron Jordan, did not give the Bears’ offense any room for success. The Saints eventually pulled away, winning 21-9.

Up in Washington, the newly named “Football Team” matched up against the Tampa Bay Buccaneers, accompanied by their 43 year old quarterback, Tom Brady. This game was much closer than experts thought, as the Buccaneers barely won by a score of 31-23.

To wrap up a wild NFL Wildcard Weekend, the Cleveland Browns, having been looking for their first playoff win since 1994, traveled up to Pittsburgh to face the Steelers. Ben Roethlisberger never seemed to get in a good rhythm, throwing for four interceptions. Browns quarterback, Baker Mayfield, was feeling especially dangerous that game, throwing for three touchdowns and no interceptions in the 48-37 win. This was the first time the Browns have beaten the Steelers at home in seventeen years.

Onto the Divisional round, the Ravens played against the Bills. The Bills’ defense completely shut down Lamar Jackson. Jackson never got quite going, making mistake after mistake. The only thing that kept the Ravens in the game was the performance of their own defense, holding the Bills to just ten points scored offensively. The Bills went on to win this game 17-3, ending the Ravens’ great season.

The Rams traveled to Green Bay to play the number one seeded Packers. Leading MVP candidate for this season, Aaron Rodgers threw for nearly 300 hards and two touchdown passes. Another bright spot in the Packers offense was Aaron Jones, who rushed for 99 yards on just fourteen carries. The Rams could never get a steady offensive rhythm, leading to a 32-18 loss.

After an incredible win against the Steelers, the Browns were set to play the defending Super Bowl champions, led by one of the best quarterbacks in the league, Patrick Mahomes. Even though Mahomes went out of the game with a concussion, the Browns could not come back, losing 22-17. Browns fans should keep their heads held high. They are quite possibly one key defensive piece away from being a real threat to win the Super Bowl in the future; the sky is the limit for this team in the future.

Wrapping up an action packed Divisional round, the Saints hosted the Buccaneers. These division rivals have played twice before already this season, resulting in the Saints easily taking care of their rivals. Although the Saints have taken care of business previously in the season, it is not an easy accomplishment to beat Tom Brady three times in a season. The most impressing aspect of this game is how the Bucs defense kept the Saints in check, forcing three interceptions thrown by future hall of famer Drew Brees. Brees did not play well at all, resulting in a 30-20 loss. Another disappointing Saints playoff loss has arrived, and Drew Brees will most likely retire this offseason, ending a fantastic career. The Saints will look to address the quarterback situation for this upcoming season if they wish to get back into the playoffs.

This past weekend, the AFC and the NFC championship games were played, deciding who will earn the right to play on Super Bowl sunday. The Packers played host to the red hot Buccaneers. This was the first time that Aaron Rodgers and Tom Brady have ever played each other in a playoff game. Despite the Bucs missing their star rookie safety Antoine Winfield Jr, they were still able to hold Aaron Rodgers and the explosive Packer offense to only 26 points. However, Rodgers played exceptional, throwing for 346 yards and three touchdowns. His performance was not enough as Brady also threw for three touchdown passes, earning the 31-26 win and securing a visit to his tenth Super Bowl appearance.

On to the AFC, the Bills traveled to play against the almost impossible to beat Kansas City Chiefs. The Bills played a solid first quarter, going up 9-0, but for the rest of the games it was all Patrick Mahomes. Mahomes threw for nearly 400 yards and 3 touchdowns Bills quarterback Josh Allen showed that he was not quite ready for the Super Bowl, having many yards thrown, but hardly any points to show for it. The Chiefs would go on to win by a score of 38-24, securing their second straight Super Bowl Appearance.

The stage is set for Super Bowl 55 as the Chiefs will take on the Buccaneers. Fortunately for the Bucs, the game will be played in their home stadium in Tampa Bay. The Bucs will need a lot more than home field advantage if they want to dethrone the defending champs. If we have learned anything from Tom Brady, it’s that he will give us a great show on the world’s biggest stage.