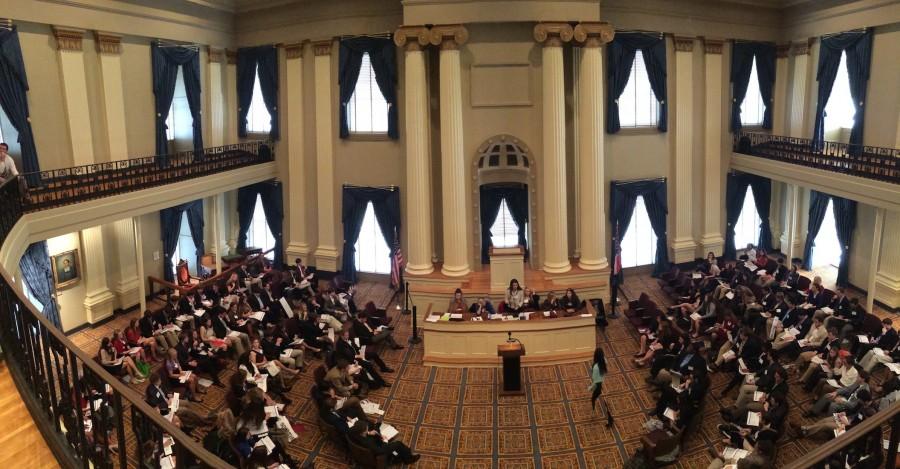 Youth Legislature or Youth Leg is a program in which high school students from all around the state come to Jackson to participate in a mock legislative session. Just before Thanksgiving break, students from both public and private schools come together in hopes of having their bill signed into a “law.” Students take on the pretend role of as a legislator, lobbyist, press delegate, or a legislative page.

Two or three legislators write a bill in which they debate the reasons why other legislators should vote for it. The bill goes through the whole legislative process like it would in the Mississippi Legislature. A bill must be passed by the legislator’s committee before it can move to the floor of the House or Senate.

Each student must make a placard with his or her name and school in order to be called to the well. To be able to speak, a delegate must say, “May I approach the well?” The student legislators experience all aspects of the political system.

Junior Hannah Herrin was also a candidate for office, with the Prep delegation acting as her campaign.

All of the legislators stayed Wednesday through Friday in the Jackson Marriott Hotel. Youth Legislature held their bill debates in the Marriott Hotel, the Old Capitol Museum, and in the auditorium of the War Museum.

Many students from Prep said they loved the opportunity to participate in Youth Leg. Tenth grader William Leech said, “It was a lot of fun being apart of an organization that had a lot of intelligent people with interesting bills that we could debate on.”

Senior Holt Crews said that he really liked Youth Leg and that he is sad that he cannot attend next year. Overall, the students seemed to have loved Youth Leg.

***CORRECTION: In the print version of this story, Hannah Herrin was misidentified as a senior.****