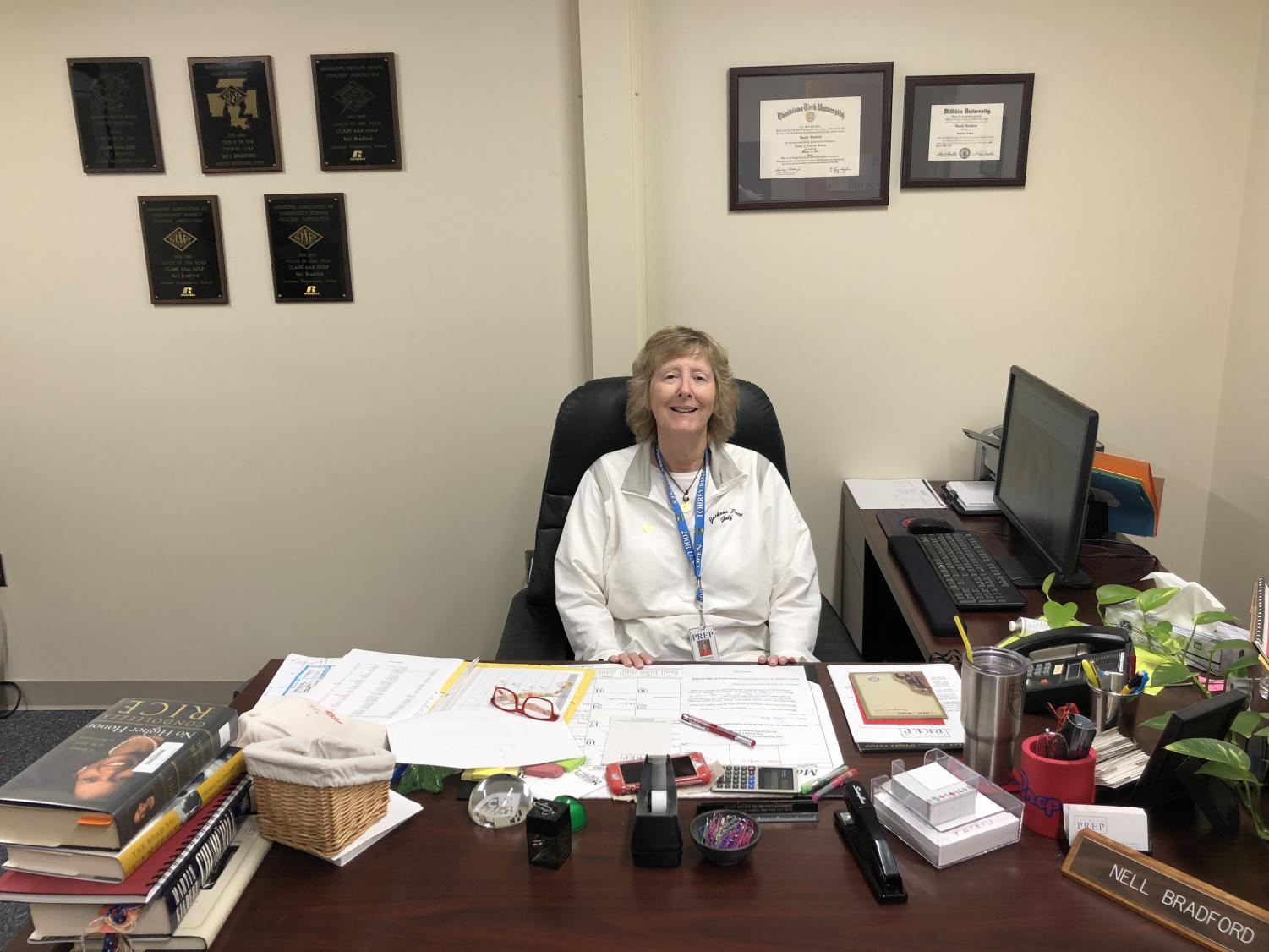 Of all the significant changes that Prep has had in the past decade, one thing has remained constant:  the presence of Coach Nell Bradford on campus. For the past 33 years, Coach Bradford has served in many different positions and has continuously made positive contributions to the school each and every day. Her tenure has come to an end, and at the end of the year, she will say goodbye to Jackson Prep as an administrator.

In 1984, Bradford came to Prep in search of a job. At the time, the school was in need of a basketball coach and a history teacher. Who else could be better to fit the job?

Before Prep, Coach Bradford did a lot of traveling before landing in Jackson. Growing up, her father worked for a popular dog food company, and his job constantly landed him in various places around the country. Eventually, they came to Jackson, and she has been here ever since. Once in Jackson, she attended Belhaven and Jackson State. After she graduated, she worked at the Ed Center before coming to Prep. When she came, she says she had the pleasure of being interviewed by Ms. Susan Lindsay, Coach Buddy Crosby, and Prep’s first Headmaster, Mr. Jesse Howell – how about that for a first interview?

After serving as a “young coach with a lot to learn” for every basketball team and a history teacher for every grade except 7th, Coach Bradford became assistant head of the high school in the 1998-99 school year. She has served in this position ever since.

Coach Bradford says the thing that she will miss the most is all of the people: “After 33 years with them it makes them your substitute family.” She has been through the ups and downs with them, mainly the students, but she will miss everyone because of the day to day interactions. When asked what her least favorite/hardest rule to enforce was, Coach quickly said the dress code. This is because of how hard it was to enforce and how often it became personal, which she does not like. She has also always been astounded by the athletics at Prep and will miss them.

One thing she is looking forward to is relaxing. When asked about her retirement plans, she said she has none. She says she is “comfortable reading a book and contemplating God’s creation.” Since she is an avid golfer and is the golf coach, she does expect to do a lot of golfing ,and will still continue to help out with Prep’s team despite not being the head coach. One thing she looks forward to is being able to attend the events that she wants to and not having to be “on duty” at them. She will also be on the substitute teacher list so students can expect to see her around the halls from time to time. Despite this, relaxing is still the main focus on her mind. She says that “In today’s busy world it’s great to take time to just be yourself and enjoy what God has given you”.

The biggest thing about her is her loyalty to this school and how much she cares about the students and everyone else.”

A lot of changes have happened in the time that Coach Bradford has been here. She has seen multiple heads of school, the construction or of almost half of the campus, and a host of other changes. When asked what was the largest change was that she saw, she said the McRae building. This is because of how much it changed the dynamic of Prep and the space it offered (example: the library used to be where Mr. Devine’s room is now).

Bradford says what hasn’t changed that much are the teachers and students. Despite her describing students as being “like big third graders,” she meant this in a very good way and still thinks Prep is  the hardest-working school because she always sees the teachers teaching and everyone learning and listening.

Since Coach Bradford has been here for more than 33 years, you can expect her to have seen a lot of crazy and interesting things. She said once she saw a kid try to do a handstand and subsequently fall through a window. She has also seen many senior pranks. Her favorite senior prank was when she came to school and every single desk was in the hallway, or when she would go out of the classroom and come back to having every single thing in the room was reversed.

One thing she has noticed that has changed is how rushed everyone is nowadays. She thinks that everyone could take some time and be a little nicer, even in today’s busy and chaotic world. When asked if she had any advice for Ms. Sarah Scruggs, who will assume her position next year, Bradford says that it will be necessary to “gear back” and not say something you shouldn’t. Being a high school administrator can be a very challenging job at times, and it’s always good to have and keep good relations.

Coach Bradford has been a great influence on the school. Senior High principal Dr. Luke Nealey says that “she has been a real backbone to this senior high office for years.”

Nealey went on to say, “The biggest thing about her is her loyalty to this school and how much she cares about the students and everyone else.”

English and Debate teacher Mr. Richard Younce says that he “doesn’t think people understand how much Coach Bradford does for Prep” and knows that not only will he miss her, but everyone will miss her more than they realize.

It goes without saying that her presence will be greatly missed in the halls of the senior high and the school as a whole wishes her the best in retirement.