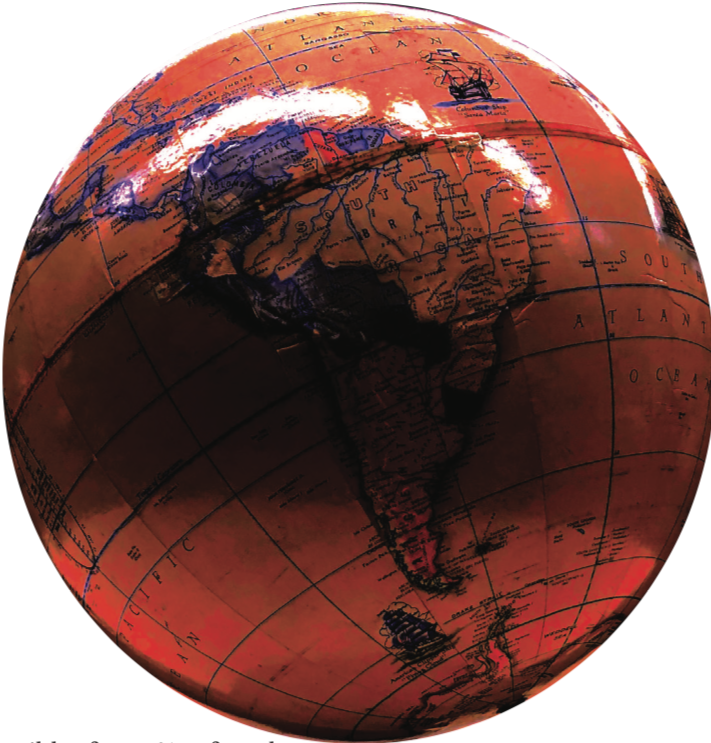 Earth is getting warmer. (Genevieve Hurst)

Earth is getting warmer.

OPINION: Global warming is something you should care about

“Spare us all word of the weapons, their force and range, The long numbers that rocket the mind; Our slow, unreckoning hearts will be left behind,  Unable to fear what is too strange. Nor shall you scare us with talk of the death of the race.   How should we dream of this place without us?”

Richard Wilbur’s “Advice to a Prophet” reflects a major flaw in human thought:  that we cannot comprehend our own downfall. We have been warned many times that we are hurtling to our doom, that we are killing our planet, that in the span of a couple of centuries the earth will be near apocalyptic unless we change now. But what do we do? Shrug it off. Call it ridiculous fear mongering. Outright deny it. The destruction of the Earth sounds like fiction. Unfortunately, it’s not, and if we don’t act soon, this bleak future will be upon us.

The global average temperature is now 1 degree Celsius over the pre-industrial average and on track to reach 3 degrees by the end of the century. To put that in perspective, the last ice age was 4 – 7 degrees Celsius away from the average. Within the last couple of centuries the earth has heated up at an unprecedented rate due to the emission of greenhouse gases, most notably carbon dioxide and chlorofluorocarbons. The Intergovernmental Panel of Climate Change has long warned that we should limit warming to 2 degrees Celsius but has recently changed that to 1.5 degrees, stating that even 2 degrees would have disastrous effects. 2 degrees alone, keep in mind we are in track to reach 3, would result in further arctic destruction, the destruction of the coral reefs, an increase in tropical storms, an increase in size and length of droughts, famine, trillions of dollars of damages, and the flooding of coastal areas, all resulting in the displacement of 200 million people. Reaching the goal of 1.5 degrees would require drastic reduction in carbon emissions in the next 12 years and a net 0 carbon emissions after 2050. It’s not going to be easy to reach this goal, but at least we can trust in our leaders to work hard to avoid this global catastrophe. Right?

According to Donald Trump, climate change is a “Chinese hoax,” or “something that will change back,” or straight up fiction. Many Americans, mostly Trump’s base, fall in with his line of thought.

Climate change is real, and even the big energy companies are acknowledging it.”

The outright denial of climate science is thriving in America due to the efforts of the Western Fuels Association to “reposition climate change as theory (not fact)” and the efforts of people like Republican senator James Inhofe, famous for throwing a snowball in the Senate to disprove climate change, who receives much of his funding from oil and energy companies.

I’ve been told a lot by my conservative friends “facts don’t care about your feelings,” and I feel like this is a situation where that statement is most applicable. Climate change is real, and even the big energy companies are acknowledging it. For example, Exxon Mobil addresses climate change on their website, and Big Oil has asked Texas to request funding to build sea walls in order to protect oil rigs from tropical storms and flooding caused by climate change.

If you are still skeptical on climate change, I recommend you visit skepticalscience.com, a website that disproves many of the myths surrounding climate change.

I’m not asking you to give up your truck and buy a Prius, or to go vegan, or to center your life around reducing emissions. Doing the little things to combat climate change would help, but you are far from being the main offender. Since 1988, just one hundred companies have been responsible for 71% of carbon emissions. We need to hold these companies accountable, and we cannot rely on our current leadership to do it.

In 2018, carbon emissions reached a record high of a projected 2.7% increase, with the U.S. being the second highest contributor behind China. Preventing climate change is an issue that the U.S. cannot tackle alone, but as one of the most powerful nations on Earth and the second worst offender to the climate, we must take a stand.

Under the current administration, we cannot do that. Trump is disastrous for the climate, withdrawing from the Paris Accord, appointing an ex-coal lobbyist climate change denier to the head of the Environmental Protection Agency, and getting rid of crucial climate change regulations. We simply cannot continue like this.

As outlandish as the destruction of the Earth seems, it is happening right in front of us. As people who actually live on Earth this is something that we should all care about. Climate change is real, and it is a threat to not only the environment but to us and future generations.  As an average U.S. citizen, the best way you can combat climate change is to vote. Vote for politicians who will hold the corporations destroying our future out of avarice accountable, who will fight to protect the Earth, and who will ensure a future for our children.  We are on track for disaster, but not all hope is lost. There is still time to save the planet if we choose to act now.