Football claims 7th in a row

One Mississippi: with 17 seconds left to play and a yard to gain, quarterback Alex Gibbs lined up under center with running back Jerrion Ealy, full-back Ross Hopkins, and power-back Ethan Lingle directly behind him in the power-I formation.

Three Mississippi: Jerrion Ealy takes the handoff from Gibbs and leaps over the entire offensive front, landing 3-yards past the line to gain. This moment sealed the win for Jackson Prep, claiming a seventh straight championship with the 33-27 win over Madison Ridgeland Academy. It was a game that lasted 2,880 seconds and was filled with seven turnovers, 721 total yards, a quarterback change, 5 missed extra points, an onside kick recovery, and some late 4th quarter drama, but at the end of the night, it was defined by 3 seconds and a single yard. 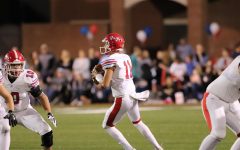 MRA hands Prep their first loss of the season

Although Jackson Prep has been the king of the M.A.I.S. for the past decade, the 2018 campaign seemed as if the tide was going to change. To simply put it, the regular season matchup was a wake-up call for Prep. Jackson Prep and M.R.A. both entered the ballgame undefeated; however, the dominance that surrounded Jackson Prep for the 2018 season was short-lived. M.R.A. put up 42 points, with 28 of those coming in the second half. This loss snapped a 26-game win streak and was the first time M.R.A. had beaten Prep since 2010.

Media pundits from across the state picked Jackson Prep in the regular season showdown, but after a dominating win for M.R.A., every one of these media members switched their support to Madison Ridgeland Academy. For the first time in five years, Jackson Prep was the underdog, something Coach Ricky Black and his team tried to embrace. During a championship press conference held at the Mississippi Sports Hall of Fame on Monday, November 12th, Coach Black said, “I’m sure we’re the underdog, and that’s something our players have learned to deal with.” While it was unfamiliar territory for the Patriots of Lakeland Drive to be considered an underdog, many of the seniors stressed that it needed to be used as fuel instead of fear.

As the night grew colder, so did the tension and nerves of the Jackson Prep sideline. Would the championship streak reach 7? Could Prep knock off an equally talented team who bulldozed them earlier? If you asked around town, the answer was simple: not a chance. However, what everyone didn’t take into account was the heart of every Jackson Prep player. They weren’t playing for the name and number on the back of their jersey, they were playing out of love for the name on the front, and the legacy that surrounds those four letters–P, R, E, P.

The game couldn’t have started any better for Jackson Prep. M.R.A.’s quarterback, Philip Short, bobbled a low snap leading to a defensive recovery on the second play of the opening drive. Jerrion Ealy–the 4th best high school running back in America–punched in a sweep from 17-yards out a few plays later. Red powder filled the air as the Jackson Prep student section erupted. Just like that, Jackson Prep had the lead and a glimmer of hope shined through the darkness at Robinson Hale Stadium. M.R.A. followed suit with a score of their own a few drives later evening the score. Even though it seemed as if M.R.A. was picking up steam in the second quarter, a handful of interceptions by the Prep defensive backs flipped the momentum in favor of the Patriots of Lakeland Drive.

Jerrion Ealy was spectacular Friday night. He rushed for nearly 200 yards, 41 receiving yards, and accounted for three Patriot touchdowns, but the most memorable play he made was on the defensive side of the ball. During the last M.R.A. possession of the first half, Ealy slipped in on defense as a free safety. Phillip Short rolled right to escape from pressure and connected with a wide-open receiver. However, the M.R.A. WR’s glory was short-lived. Ealy, who was almost 15-yards away at the time of Short’s throw, lowered his shoulder pads and brutally de-cleated the M.R.A. receiver.

Although the halftime score doesn’t show it, Prep struggled offensively in the first half. Junior Jake Lange, who won the starting quarterback job seven games into the season, had a rough opening half. He threw two interceptions in the first quarter, and could not move the offense downfield. Head Coach Ricky Black knew there needed to be a change, so he called for the back-up to get loose–senior Alex Gibbs who had lost the job earlier to Lange. Gibbs was sensational in the second quarter. On his first drive of the game, Gibbs launched a missile downfield into the hands of WR Peyton Greenwood for a 35-yard gain and the first down. He then marched his team down the field to score back-to-back touchdowns.

The second half was filled with smash-mouth football as both teams struggled to gain momentum. Jackson Prep regained momentum when the lead was extended to 33-20 with 4 minutes left in the 4th quarter. M.R.A. did not go quietly into the night even though Prep was ahead by two possessions. Phillip Short connected a deep ball to WR Landes Purnell who muscled his way into the end zone, overpowering two Prep defenders. Prep’s lead was cut to six as the Patriots of Madison County lined up for an onside kick. It was a low, missile-like kick that ricocheted off the facemask of a Prep front-line player. As players collided towards the ball, Prep senior and cornerback, Carter Stockett, lunged through multiple M.R.A. players to snag the loose ball.

The Jackson Prep sidelines and student section were seemingly silent as both teams fought for the ball, and when Stockett emerged with the pigskin, there was not a seated, nor calm, Prep fan. The bleachers shook, the players shoulder-bumped, and once again, red powder filled the air. Afterward, it was as if each Prep fan took a collective sigh of relief.

This wasn’t the last drama-filled moment, though. It was 4th & 1, and as the clock ticked down to 17 seconds, Coach Black was forced to make a decision: punt the ball and pin M.R.A. deep with only seconds left or go for it and seal the win. At first, Coach Black sent his special teams unit out to punt, but a last-second gut feeling cause him to go for it. It was evident that Jerrion Ealy would receive the handoff but what followed was unexpected. Ealy, with a full head of steam, leaped over the entire offensive and defensive lines, landing well past the line to gain. “It looked like he was flying…I never saw that coming,” said senior WR Thomas Thornton. As the clock struck 0, each Jackson Prep water-cooler was emptied on the entire coaching staff.

It indeed was a team effort, and the passion and love each player played with was inspirational. One of the most inspirational players of the game was Alex Gibbs. Gibbs, the senior quarterback who waited since junior high to play, had been benched for an underclassman. Instead of giving up and losing focus, he patiently waited for his second chance. It is a lesson that all people can learn–when an opportunity doesn’t go your way, stay focused and committed in case a second opportunity presents itself. Jackson Prep held off M.R.A. to keep the championship streak alive.