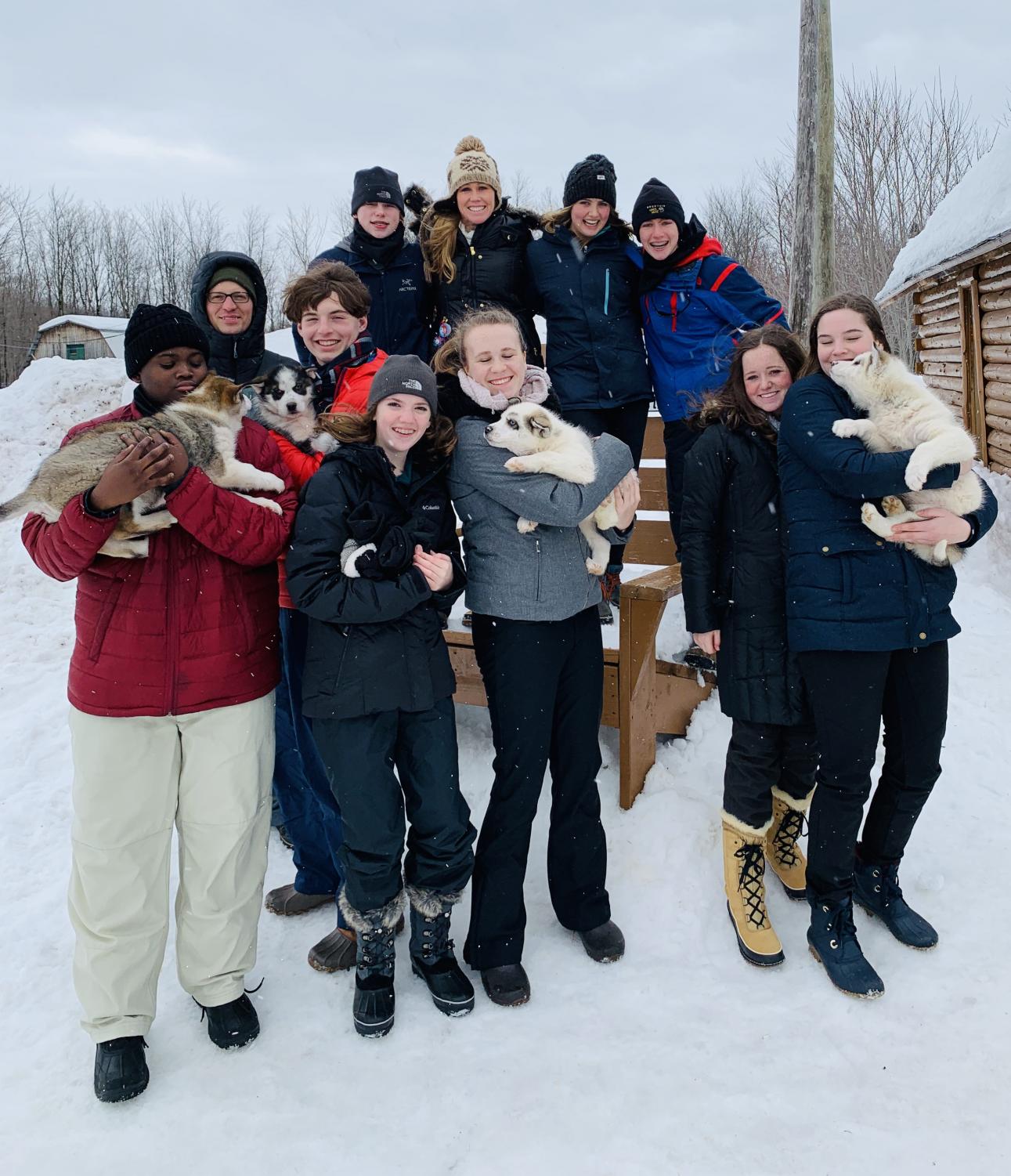 Puppies in the snow…what’s not to love? (All photos courtesy of Cory Caton)

Puppies in the snow…what’s not to love?

All photos courtesy of Cory Caton

On February 7th, nine ambitious French students from Prep were accompanied by two teachers to begin their journey to the “Maple Leaf” country of Canada.

Students ranging from 8th-11th grade met Coach Cory Caton and Mr. Hunter Upchurch at the airport to catch their flight at 6 a.m. From Jackson, to Atlanta, and finally to Montréal, Canada, the group had concluded a full day of travel and had made it to the first stop of their 5-day excursion.

Stepping outside the Montréal airport, everyone felt the drastic change in temperature from what they were used to. Daily temperatures of 12-14°F in Montréal represented a significant drop for these Mississippians, calling for many layers of clothing at all times. This included large jackets, snow pants, gloves, wool socks, and water-resistant boots. 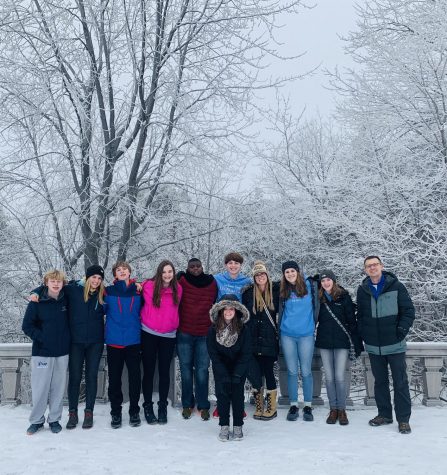 The students saw all kinds of sights on the walking tour of Old Town, a tour of the interior of the famous Notre Dame Basilica, and all kinds of people speaking English and French along the snow-covered streets. Many students experienced their very first hockey game, the Montréal Canadiens vs. the Edmonton Oilers. After many goals, and a few fights here and there, the game ended 5-1 in the Canadiens’ favor.

The next morning, the group departed from Montréal on a 3-hour bus ride to Québec City, where they spent most of their trip. On the way there, the students ran into a “language” barrier, so to speak. Québec is actually one of the two provinces in Canada that recognizes French as its official language (the other being New Brunswick).

When the group stopped for lunch at Tim Horton’s, a tasty breakfast and coffee restaurant (think Dunkin’ Donuts), many of the workers there either spoke very broken English or none at all.

After many struggled to order what they wanted, Coach Caton, a native Canadian who teaches French, stepped in and assisted, making the students feel a bit of relief when biting into their donut holes. Unfortunately, this was only the start of struggling to communicate with the locals of Québec. 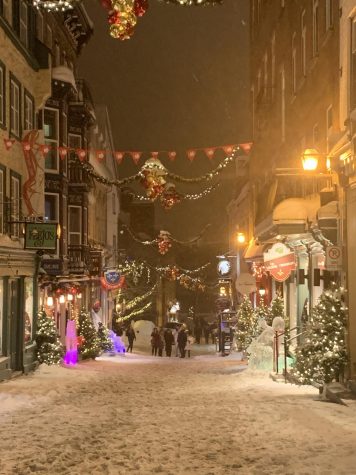 Right outside of the city was La Poursuite Chenil, or when translated “The Kennel Pursuit”. Here, the group spent 3-hours dog sledding, snowshoeing, tube sliding, and exploring the origin of how natural maple syrup is made. They were also given the opportunity to try the maple syrup, along with maple taffy and maple butter. After eating as much taffy as they could, the group hopped back on the bus and were soon en route to the heart of Québec City, where they were staying.

The group stayed at a fantastic castle-like hotel, Fairmont Le Château Frontenac, which had amazing views of the Saint Laurent River, which was half frozen over. It was very convenient being at the center of the city so they could walk everywhere they had planned.

The first day in Québec ended as the group returned to Le Château. Coach Caton let them loose into the knee-deep snow in front of the hotel, and for about an hour or so, everyone played in something that isn’t regularly experienced at home. With joyous smiles, they buried each other in the snow and formed balls of white (that actually held together).

Saturday was a day filled with activities of the Carnaval de Québec like Bonhomme’s Ice Palace, ice sculpture shows, and tons more outside activities to really get a feel for the culture of Québec and its people.

That night, the group stayed around the streets of Québec and watched the Carnaval Parade. It was what felt like the coldest night of the trip, standing around waiting for the parade to continue. Most of the group actually went inside a nearby restaurant to warm up, while a few others stayed behind to tough it out (sophomore Kimberly Blount and junior Maggie Rutledge). The whole group was relieved as they arrived back at the hotel to finally feel warm again and get some rest.

Sunday arrived with sun rays gleaming through the windows. The group rendezvoused in the lobby and headed toward the Montmorency Falls via motorcoach. The tour guide explained that the spectacle is actually larger than the famous Niagara Falls. 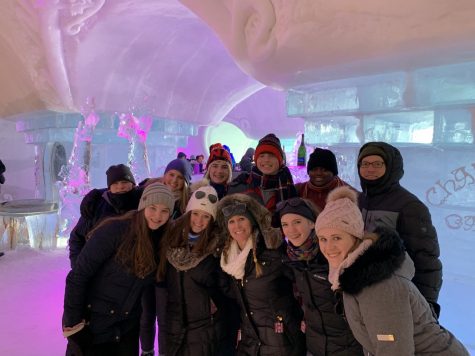 Most of the water was completely frozen over with people walking all over, and others climbing up the falls, pick in hand. After taking pictures, the group left for breakfast at a famous rural lodging place named Chez Marie where a lady made breakfast for them and another tourist group sitting adjacent to them.

After breakfast, the group went on a trip to The Basilica of Sainte-Anne-de-Beaupré which was fascinating. Beautiful architecture and gorgeous artwork laced the sanctuary. A completely French-spoken mass was being held as the group walked in and around the church.

A highlight of the trip to the Basilica was two “pieces” of Sainte-Anne. One, a piece of her forearm, is encased in the front part of the church inside a golden mold of a hand. The other, a very small piece of her skull, is encased in the bottom floor, used as a more special place to worship. As the group left the Basilica, they weren’t aware of the amount of fun that was waiting to come.

Around 3:30 or 4 p.m., the group arrived at Valcartier Village des Sports and stayed until around 7 tubing down snowy hills, twisting and turning down the slopes with a couple people in each raft, and visiting the ice hotel. The ice hotel, believe it or not, is completely made of ice. Each year, construction begins around the beginning of winter. This year, the tour guide explained to the group, it got so cold around December that the projected goal of completion, initially projected for January, was met around Christmas. The ice hotel stays up until around the end of March, when it is bulldozed and completely demolished until the next year.

The most interesting thing about Canada to me was the culture. The people in Canada were just as nice as people in Mississippi.”

As the group came back to their hotel, they ate at the crêpe restaurant right next door and have a great last dinner in such a beautiful city. They were sad that this is their last night, as Tyler McMurtery, a sophomore, says, “can we stay just one more night?” The realization of it being the last night really struck the group. One last night in a room overlooking the Saint Lawrence River, one last night in Le Château Frontenac, one last night in Québec City, and one last night in the oh-so-wonderful country of Red and White.

The group woke up bright and early Monday morning: suitcases packed, wallets full of Canadian coins, and the sun shining down as they all loaded into a mini-coach and headed towards the airport. They stopped once for breakfast, another encounter with Tim Horton’s, but this time, the group was much more prepared. Compared to the first run, almost everyone ordered without much assistance. The next stop was Montréal for a shopping run at a mall, Centre Eaton Montréal, spending two hours eating and getting last minute souvenirs for the whole family.

At 3:15, the group arrived at the airport. After going through customs, people exchanged their Canadian money back to American and wait for their flight, which was not until 6. A long night of flying was about to ensue.

Looking back on the trip, Coach Cory Caton said, “[I have] been taking this trip for 15+ years and I absolutely love exploring the language and culture with French students of any and all levels. Their appreciation for the language and a different culture is so awesome. Dogsledding this year was an awesome addition. My other favorite events are Valcartier, [the] Ice Hotel and definitely the hockey game! Staying in the Château Frontenac was also amazing this trip!”

French I student Tyler McMurtery, a sophomore, said, “The most interesting thing about Canada to me was the culture. The people in Canada were just as nice as people in Mississippi. Wherever you went, there were smiling faces, but their way of life is so much slower than our American lifestyle, and it gives you time to take in your surroundings and appreciate how they live their lives.”

Rebecca Burrow, a junior French III student concurred. “My absolute favorite part [of the trip] was the dog sledding because it was a really unique and fun experience and of course, [the] puppies! But really, it was beautiful and very relaxing,” said Burrow. “My favorite city was Québec City because of the intricate, antique architecture and fun culture.”

The cultural immersion that takes place on such trips, the many things you get to learn to help understand the world and its people just a bit more, is a major reason people recommend international travel for high school students who have the opportunity. Seeing people of different culture, religion, ethnicities, and nationalities prosper in their own unique and amazing ways is a sight for sure.  It really is magical to delve into a society that you’ve never really explored before and get to be right in the middle of it for even just a few days.