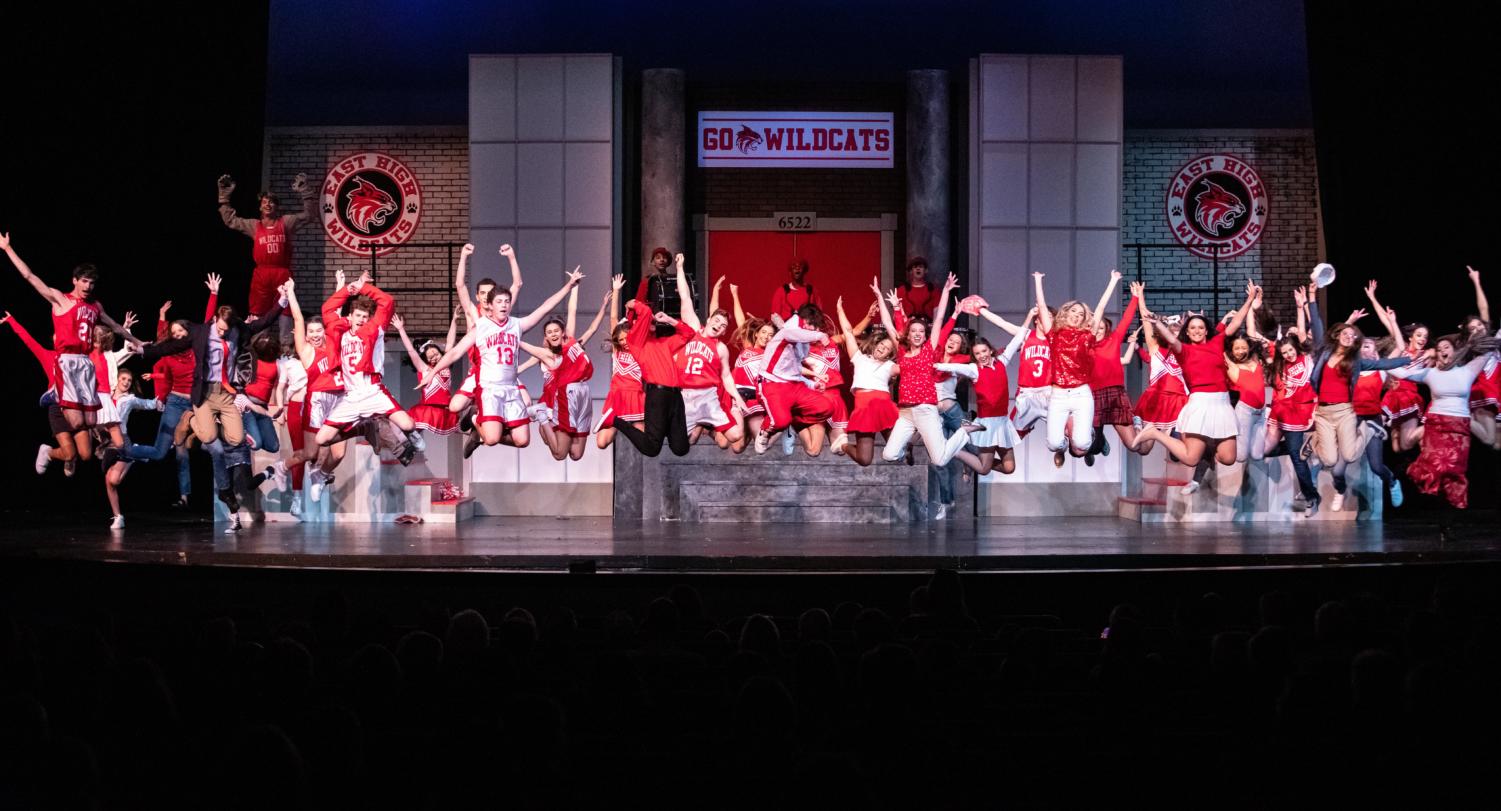 The Prep cast of “High School Musical” leaps into the air. (Photo courtesy of Niki O'Quinn)

The Prep cast of “High School Musical” leaps into the air.

Despite the drawbacks Prep has seen this year due to Covid, the production of High School Musical premiered on Saturday, April 17. The musical hosted two shows on the 17th and two shows the following Monday and Tuesday.

A lot of hard work and dedication went into the highly anticipated performance. Students spent many days after school perfecting their dances, learning songs, and memorizing lines. The cast had quite the scare when several of the leading parts tested positive for COVID-19 or were considered exposed. For a quick second, understudies thought they would have to stand up and fill the roles. Fortunately, after affected students quarantined and safely returned to school, the production was able to go on as planned.

The cast consisted of many talented students ranging from freshmen to seniors. Two of the main characters, Troy and Gabriella, were played by sophomore Emerson Rhinewalt and senior Emma Liddell, respectively. Wanting to join in the fun, many other high school students acted as extras for the show; such roles included skaters, jocks, brainiacs, basketball players, etc.

The plot of the musical followed a new high school student named Gabriella Montez who is starting her school year at East High School. Troy Bolton, a popular basketball player, and Gabriella hit it off despite their differences in the stereotypical cliques of high school. Regardless of their friends’ disapproval, the two tried out for their school’s musical and landed the leading roles. This causes many characters to be angry, including the school diva, Sharpay, her twin brother, Ryan, the Brainiacs, and the Jocks who all try to thwart the couple’s chance at performing.

After practicing for almost four months, opening night finally arrived, and the cast’s hard work paid off. Tons of students and families filled the theatre to support and watch friends and relatives perform.

As the show progressed, the audience slowly started to see the chemistry between the two main characters unfold throughout their multiple duets. Emerson and Emma nailed each performance together, and their voices complimented each other well. Miss Sharpay Evans was played beautifully by Tori Johnston who was seen flipping her hair, stomping her foot, and running across the stage shrieking. Her accomplice and shadow of a brother, Ryan Evans, also showed some spunk as Bradley Stafford sassed his way to the top. Another memorable actress was Mary Robinson Coco who played Ms. Darbus perfectly with her singing soprano voice. Eliza Hollingsworth, one of many spectators of the show, revealed her appreciation for Mary Robinson, “Oh my gosh! She executed that character perfectly, and I can’t imagine anyone else playing Ms. Darbus better than she did.” And another great character, Jack Scott, played by Win Speights, acted as both the narrator and the school announcement procurer and caused laughter among the audience.

We can’t forget the best part: the dancing! A musical is not complete without some fancy footwork and choreography. The many dances brought many smiles to the viewers’ faces and brought the show to life. The best scenes were the ones where the whole cast came together to perform a song.

Everyone’s moves were in sync and on beat, creating a visual masterpiece. And we can’t ignore the minor characters for really helping this musical come together. Without them, the show would not have been as dazzling and spectacular as it was.

With such amazingly gifted performers, set crew, and directors, it is safe to say that the showing of High School Musical was a huge hit and truly deserved their standing ovation.