Competitive Gaming is the New Sport

The video game industry started small in the 80s, and it’s changed a lot since then. My father’s generation was the age of the arcade: huge hulking machines lined wall to wall with crowds of kids putting quarters on the edge of the screens. The only type of competition in the arcade room was playing games like Tron or the last stage of Double Dragon with your friend.

Enter John Ramaro and John Carmack. Together they formed ID Software, a video game developing company in the early 90s that revolutionized gaming industry forever. Their first video game was a first person shooter, named Quake. It allowed online play for the first time ever.

Imagine, if you will, you are a person in the 90s. The only games you’ve played so far are games like Super Mario Bros. or Duck Hunt on your NES. The only game you have on your computer right now is Solitaire. Then, suddenly, your friend you knew in high school is on your computer screen. He live is New Jersey, now. The magic of the ether has brought you, and whoever else in the United States is playing, together. The game, naturally, exploded in popularity. Everyone who owned a computer bought a copy and played it tirelessly. People started getting better to; it became a source of pride. 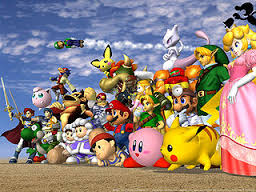 Through Internet Forums, the best players started to become known. When you recognized a name in the pool from the forums, you feared them. Eventually, those names started to compete for the title of the best, and thus, online Quake tournaments were born, and paved the era of competitive gaming.

Today, tournaments exist for almost every competitive game: Halo, Super Smash Brothers, Call of Duty, Mortal Kombat, League of Legends, and the list goes on. The differences between tournaments today and in the 90s is size. In the days of Quake, the only people who came to tournaments were the people who played Quake religiously, and compared to today, that was not a lot. This is simply because video games were still considered an underground thing, a sort of hobby that only a certain type of people bothered to pick up. The only people who attended tournaments were the people who competed in them. There wasn’t really any kind of fan base.

Today, however, there is a huge fan base. My favorite kind of tournament to watch are the Super Smash brothers tournaments, and every time I get online to watch it, I notice that the crowd that is gathered there greatly exceeds the roster of actual players. Some people legitimately go to tournaments to watch their favorite players  duke it out, and believe me, they take it very seriously. Especially in the Super Smash Brothers competitive history, there has always been a huge divide between the west and east coasts of America. Big names like Ken and Azen from the beginning have risen and fallen to new players like Mango and Mew2King.

Since then, the competitive gaming industry has exploded, all thanks to groups like MLG. MLG stands for Major League Gaming. It got it’s start in 2002, by Sundance DiGiovanni and Mike Sespo. Today, MLG’s headquarter resides in New York City. The organization’s main function is to set up online video game tournaments and stream them, and despite what you might think, it has a pretty decent following. Just type in “Super Smash Brothers Melee Tournament” into YouTube.

For people like me, this is a great thing. I’ve  never been involved in any type of sport, playing or watching; it’s always been video games for me. To see something that I love so much finally begin to get a following at least comparable to a sport is comforting to say the least. The best thing is that the venue for competitive gaming is growing everyday, and I feel that eventually it will get as much coverage to be considered a real source of entertainment.